So, this post is a companion to my earlier post, When Good Books Get Lost Behind Not-so-Good Covers. Have you ever been walking through a book store, stopped dead in your tracks, and drooled a little over the latest eye candy on the book displays? Have you ever bought a book without even caring what it’s about, just because the cover is drop-dead amazing? Have you ever gone home and read that book, and then thrown it against the wall because its was a major disappointment? I have! This post is dedicated to all those books I didn’t necessarily hate, but had higher hopes for because of their deceptive book covers. 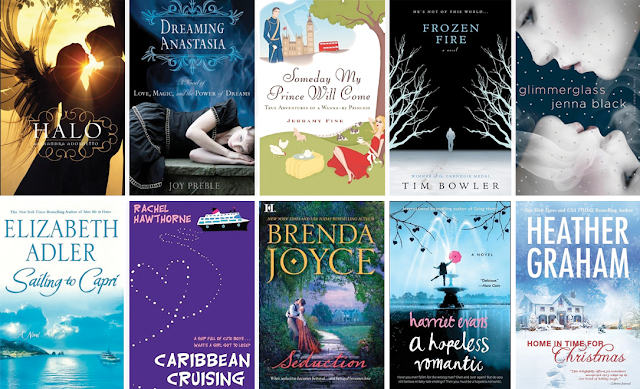 Halo by Alexandra Adornetto – This cover is gorgeous. GORGEOUS, I tell you! *Sigh* Just read my review.

Dreaming Anastasia by Joy Preble – I love the typography and the swish ornamentation. The book was just weird, though. I love Anastasia, but I did not like this author’s take on it. I don’t even wish to read the sequel. :(

Someday My Prince Will Come: True Adventures of a Wannabe Princess by Jerramy Fine – Look how adorable that cover is! I read this because of that cover. I just didn’t love the story, though. I reviewed it at The Broke and The Bookish, if you’re interested in seeing what I thought.

Frozen Fire by Tim Bowler – This book was CREEPY, but look at the glorious, ominous vector imagery on that cover! Blast! Really, the book was just weird. This guy is “not of this world” and he stalks her… walking down a snowy lanes, and not talking… and they make a point of saying that she sees him naked and he has no male body parts! I mean… WEIRD. Why do we care? I bought this for the cover, and did not consult my fellow Goodreaders. My mistake. *shudder*

Glimmerglass by Jenna Black – PEOPLE. This book is sparkly! Like, those dots are actually shiny foil dots! And her skin is impeccable. I wanted to love this SO bad, but the sequels have come out and I have no desire to read them… The plot was weak, with everything happening over and over again. It was so lack-luster that I didn’t even review it. It was just “meh.”

Sailing to Capri by Elizabeth Adler – Ahhhhh…. Italy. Yacht. Yum. I want to go there. But it was kind of boring with not much of a story line, just a list of characters. No suspense. No real substance. Grar.

Caribbean Cruising by Rachel Hawthorne – Darling cover, and I SO wanted to love it! I read this while on a cruise, though, and the book is SO WRONG (nobody her age would be allowed to have her own cabin, for one thing.). And all the girl wanted was to lose her virginity. That’s all she talked about the whole time! Read my review.

Seduction by Brenda Joyce – That cover looks so romantic! But no, the romance in this book takes a backseat to the politics surrounding the French Revolution. I was so bored!

A Hopeless Romantic by Harriet Evans – I didn’t even finish this one… So much swearing and crap going on. I couldn’t take it any longer! But how cute is that cover? I want to play in the fountain with an umbrella! And the title?? I thought for sure I’d love it, but I was so disappointed. Drat!

Home in Time for Christmas by Heather Graham – This cover is my idea of the perfect Christmas scene! I want to jump in that cover and live there forever!!!!! The book was just ok…I mean, I liked it. I just wanted it to live up to the cover. You know how it is.

Ok, guys… Which covers have deceived you? I need to know where the wolves in sheeps’ clothing are hiding! I don’t want to be fooled again. And if you loved any of these stories, don’t be upset at me! I still think you’re cool. :)