Reality TV is one of my guilty pleasures. I love it, and watch way too much of it. This topic sounded like SO much fun, so I just had to participate even though I’m currently in Europe and ended up scheduling this one weeks in advance!  If you leave me a comment, I promise I will go to your blogs when I get home and comment on yours! I can’t wait to see where you guys put your favorite authors!

Suzanne Collins on Survivor
Interesting idea, huh? I’d love to see how she would prevail in the dystopian world of Survivor, much like Katniss did in The Arena.

Tracey Garvis Graves on Survivor
I wonder if she can survive on and island as well as her characters in her book, On the Island, could!

Dan Wells on Boot Camp
Anyone remember this show? Civilian contestants were brought on and went through real Boot Camp. They participated in tasks and missions, and ultimately one person ended up winning. Partials had a lot of military influences, so I thought it’d be fun to see Dan in that environment.

Kirsten Hubbard as my teammate on The Amazing Race

Hello. Wanderlove made me want to travel everywhere, and being paired with Kirsten, a travel goddess, how could I not win?

Stephanie Perkins on Fear Factor
With blue hair and a spunky personality, I highly doubt Stephanie is afraid of anything.

Maureen Johnson on So You Think You Can Dance
I don’t know if Maureen can dance at all, but I think she would be so much fun to see on a show like this. She’s got a hilarious personality and is really likeable. Plus, I totally think she could pull off some hip-hop dance moves. 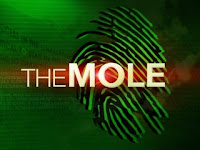 Lauren Oliver on The Mole
I loved The Mole! Anderson Cooper… ahhh… Anyway, this show is not on anymore, but it was amazing. All the contestants were supposed to work together to complete challenges. For each challenge completed, the group got more money added to the grand prize pot. But… there was a “mole” hired by the producers to sabotage all the events, yet keep their identity hidden as they tried to “help” with the tasks. Each week, contestants filled out a questionnaire all about who they thought the Mole was (they were asked things like, “Where was the mole sitting at dinner last night?” “What color shirt was the mole wearing during Tuesday’s challenge?). Whoever got the most questions wrong was eliminated. Contestants were never told if their questions were answered correctly or not, so they took a lot of notes and hoped they were on the correct path. Correct answers could have been simple guesses, but nobody ever knew. It’s kind of like a big game of Clue! The person left won. Lauren would be a wonderful mole, because she is sweet and harmless-looking, but has a wild imagination. I think she could totally deceive others, and that’s not a bad thing! Haha. I also think she’d be a really perceptive contestant who could probably win the whole thing if she were not hired to be the mole!

Maggie Stiefvater on America’s Got Talent
She’s an artsy songwriter… I wonder if she’s a performer too? Or has a sweet comedy routine?

John Green as The Bachelor

Now, I know he’s married. Haha. So this would have been before that. But think of how hilarious a bachelor he’d be? I would be incredibly entertained, and SO many bookish people would audition. Maybe the show would be filled with cool book chats instead of talk of plastic surgery or sugar daddies.

Tahereh Mafi on America’s Next Top Model
Seriously, she’s gorgeous! Now, I’d hate to throw her into the pot with all of those other mean model types on that show, because I know she is way nicer than they are. So, she should have her own room or something. Or a cabin in back. She’s win, though.

So, which authors would you like to see on TV, starring in/playing along on your favorite reality TV shows? Like I said, I’m currently in Europe with very limited computer access! I’ll respond to all your awesome posts when I get home. :)