Showcase Sunday is hosted by Vicky at Books, Biscuits, and Tea. We get to showcase our newest books or book related swag and to see what everyone else received, borrowed, bought, and downloaded!

Hello! June was a HUGE book month for me, and I had absolutely no time to film a vlog until now! So, this SS encompasses all the books I received or bought at ALA, books I got from my friends and family for my birthday, and other books I was sent for review over the last month-month and a half. It’s kind of a lot… And I’m sorry, but I tried to film a vlog 3-4 times and decided today is just not my day! So, here is a picture. Below, I categorized what came from where. :) 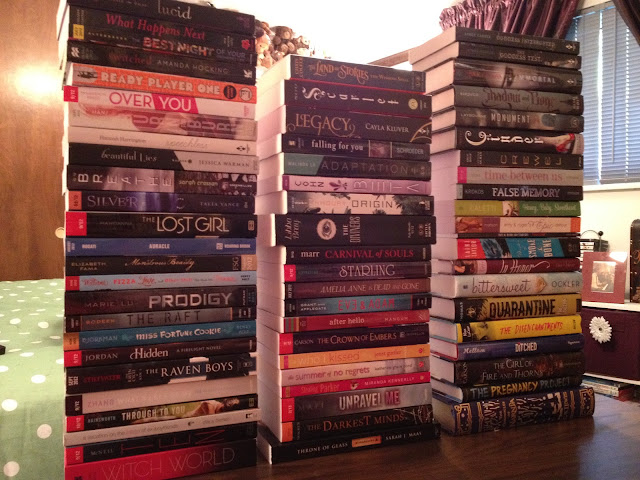 What’s Left of Me by Kat Zhang
The Raven Boys by Maggie Stiefvater
Hidden by Sophie Jordan (Firelight #3)
Ten by Gretchen McNeil
Pizza, Love, and Other Stuff that Made Me Famous by Kathryn Williams
Monstrous Beauty by Elizabeth Fama
Miss Fortune Cookie by Lauren Bjorkman
The Raft by S.A. Bodeen
Prodigy by Marie Lu (Legend #2)
The Best Night of Your (Pathetic) Life by Tara Altebrando
What Happens Next by Colleen Clayton
Lucid by Adrienne Stoltz and Ron Bass
Over You by Emma McLaughlin
Burn for Burn by Jenny Han and Siobhan Vivian
The Lost Girl by Sangu Mandanna
Auracle by Gina Rosati
Speechless by Hannah Harrington
Beautiful Lies by Jessica Warman
Breathe by Sarah Crossan
Amelia Anne is Dead and Gone by Kat Rosenfield
Starling by Lesley Livingston
A Vacation on the Island of Ex-Boyfriends by Stacy Bierlein
Through to You by Emily Hainsworth
The Land of Stories: The Wishing Spell by Chris Colfer
Carnival of Souls by Melissa Marr
The Pregnancy Project by Gaby Rodriguez
Witch World by Christopher Pike
The Diviners by Libba Bray
Ready Player One by Ernest Cline
Degrees of Wrong by Anna Scarlet
Goddess Test by Aimee Carter
Goddess Interrupted by Aimee Carter (Goddess Test #2)
The Immortal Rules by Julie Kagawa
Switched by Amanda Hocking
Legacy by Cayla Kluver

Signed books from ALA:

Origin by Jessica Khoury
Beta by Rachel Cohn (Beta #1)
Adaptation by Malinda Lo
Falling for You by Lisa Schroeder
Time Between Us by Tamara Ireland Stone
Crewel by Gennifer Albin
Eve and Adam by Katherine Applegate and Michael Grant
Stealing Parker by Miranda Kenneally
The Summer of No Regrets by Katherine Grace Bond
Scarlet by Marissa Meyer (Lunar Chronicles #2)
Throne of Glass by Sarah J. Maas
Unravel Me by Tahereh Mafi (Shatter Me #2)
The Darkest Minds by Alexandra Bracken
False Memory by Dan Krokos
Silver by Talia Vance
After Hello by Lisa Mangum
The Crown of Embers by Rae Carson (Fire and Thorns #2)
Who I Kissed by Janet Gurtler

Ditched: A Love Story by Robin Mellom – From Some Like it Paranormal
Bittersweet by Sarah Ockler (Signed) – From a Book and a Latte

Books I received as gifts:

The Girl of Fire and Thorns by Rae Carson (Fire and Thorns #1) – From Daisy
The Chronicles of Narnia books 1-7 by C.S. Lewis (B&N Leatherbound) – From Kimberly

So, what did you get? Link me, and I’ll come visit!