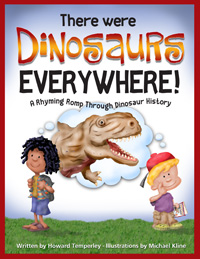 The phenomenon of the dinosaur is one that continues to fascinate people of all ages. A fun-filled history of the many species of dinosaurs, their eras, and interesting facts about them, this book is not only informative, but funny and captivating as well. Featuring amusing and attractive illustrations, this unique edition discusses a variety of topics, from the Velociraptor and Pterodactylus to the Jurassic Era and dinosaur extinction.

Growing up, I was a major fan of dinosaurs. Major. I loved Danny the Dinosaur, and I loved Barney, and I loved The Land Before Time. Dinosaurs were a huge part of my life, and I know I would have loved There Were Dinosaurs Everywhere! It’s darling, the rhymes are funny, and the pictures are cute and whimsical.

When I accepted this book for review, I wasn’t expecting to be taught so much! This really is a small encyclopedia of dinosaurs, and I can see it as a fundamental classroom book. When I used to teach elementary school phonics, I spent a lot of time memorizing poems with the children. It taught them how to rhyme, how to memorize, and even some fun facts they could say at the dinner table. This book is a gold mine of fun poems and catchy rhymes. I’m sure my students would have loved rattling these off, and maybe even making up tunes to sing them to. It’s the kind of book I just know kids would want to read over and over again.

This book takes its readers through all of dino history, from their birth, to the very early dinos, to how we found out about them (from fossils), how they were named, how they learned to fly, which ones lived in the sea, if they were smart, what they ate, all the different kinds of dinos, the end, and even the different periods of dinosaurs. There’s a ton to learn, and they are all topics that children are naturally curious about. Plus, some of the poems are quite silly. My favorite one talks about how if Jonah had been caught by a raptor instead of a whale, things would not have worked out so well for him. Here’s a small portion of that poem:

Raptors knew to masticate
Every mouthful that they ate.
Unlike that most unfortunate beast
That chose poor Jonah for its feast
And found itself obliged to spew
Onto shore what it failed to chew.

The illustrations are SO cute! They have character and facial expressions. We see dinosaurs talking to students, wearing hats and glasses with big noses, and with buck teeth. I loved flipping through the pages and seeing them all.

Overall, this book is a very fun way to teach kids about dinosaurs. So often, dinosaur books have scary pictures with blood and carnage. I’ve SEEN the book in the library at the school I taught at. Some of them were disturbing! I know I will be saving this one for my future kids, and would have been happy to have it to read to my students!

One response to “There Were Dinosaurs Everywhere! by Howard Temperley | Children’s Book Review”