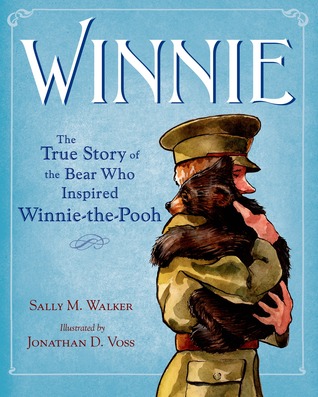 Winnie: The True Story of the Bear Who Inspired Winnie-the-Pooh by Sally M. Walker
Illustrated by Jonathan D. Voss
Published by: Henry Holt and Co.
Pages: 40
Source: From the publisher
Buy the Book • Add to Goodreads

Who could care for a bear? When Harry Colebourn saw a baby bear for sale at the train station, he knew he could care for it. Harry was a veterinarian. But he was also a soldier in training for World War I. Harry named the bear Winnie, short for Winnipeg, his company’s home town, and he brought her along to the training camp in England. Winnie followed Harry everywhere and slept under his cot every night. Before long, she became the regiment’s much-loved mascot. But who could care for the bear when Harry had to go to the battleground in France? Harry found just the right place for Winnie while he was away—the London Zoo. There a little boy named Christopher Robin came along and played with Winnie—he could care for this bear too!

This book warmed my heart. I absolutely loved Winnie the Pooh as a child. To be honest, I still do. I had heard Winnie the Pooh was inspired by true events, but I had never heard the story. And honestly, it’s one of the sweetest stories I’ve read in a long time.

The story takes place during WWI times, and just enough information is provided to the reader to understand what’s going on without scaring them. The focus is entirely on Harry and his bear. Harry met little Winnie at the train station, where she climbed into his lap and licked his chin. He bought her for $20. From the beginning, her relationship with Harry was so sweet. Readers learn what Winnie and Harry did together, how Winnie played, what she ate, where she lived, and where she slept. She nuzzled the muzzles of horses, and then needed cuddle time if they scared her. How cute is that? It is no question at all that little Winnie was a unique and special bear. She was brought to the London zoo when Harry and the other soldiers could no longer care for her (they went to war), and little children played with her there (one of them was named Christopher Robin). They even rode on her back! She was so happy. And the story has a happy ending with a bit of a twist that will make you smile. :)

The illustrations are simply beautiful. The tenderness between Harry and Winnie is so perfectly illustrated with soft watercolor tones. As a bonus, black and white photos of the real Harry and the real Winnie are included as well, and they are such a wonderful addition to the story. We get to see Winnie sitting in Harry’s lap for the regiment’s group picture and we get to see her do tricks for apples. There’s an author’s note at the end of the book, which provides more information about Harry’s and Winnie’s lives. Sources are also cited.

I love this story. It’s perfect for lovers of animals, Winnie the Pooh, history, and magical stories. People today would never buy a baby bear, much less take it on a transatlantic voyage to England. This gives the story a sense of fantasy, but children will be delighted to hear it’s true! Definitely pick up a copy of Winnie. It’s one of the best children’s books I’ve read in a while.