THE FACTS
• Julian Roman, age sixteen, is an escapee from the Fairmount County Juvenile Detention Facility.
• His parents, Michael Roman and Jennifer Roman, are dead.
• Julian is wanted for murder.

THE QUESTIONS
• Why is Julian Roman on the run?
• Just how dangerous is he?
• And who did kill Michael and Jennifer Roman, if not Julian?

Seventeen-year-old Day Baker views life through the lens of her camera, where perspective is everything. But photographs never tell the whole story. After Day crosses paths with Julian, the world she pictures and the truths she believes-neatly captured in black and white-begin to blur.

Julian is not the "armed and dangerous" escapee the police are searching for, but his alibis don't quite add up, either. There is more to his story. This time, Day is determined to see the entire picture . . . whatever it reveals. Did he? Or didn't he?

Day digs deeper into the case while Julian remains on the run. But the longer her list of facts becomes, the longer the list of questions becomes, too. It's also getting harder to deny the chemistry she feels for him. Is it real? Or is she being manipulated?

Day is close to finding the crack in the case. She just needs time to focus before the shutter snaps shut.

Laurie Faria Stolarz is a master of suspense and romance. In this page-turning thriller, Stolarz tackles dark truths with a powerful, contemporary voice. Shutter will keep readers guessing until the very end.

Welcome to my stop along the Shutter blog tour, hosted by the Irish Banana Review! Doesn’t the book synopsis sound awesome? I was totally on board as soon as I read about it, as I love reading mystery-type books in October. Shutter takes place during the exact same time of year as I read it, which I thought was a lot of fun. It got me so excited for fall and colder weather. I love this time of year, and the author did a great job of really capturing the season.

I liked Day a lot. Her obsession with photography was unique and fun to read about. I saw a lot of myself in her. I’ve always had an artistic outlet in my life, so I understood her passion and desire to always keep it close to her heart. I also understood her desire to help Julian. I would have wanted to do the same thing, especially since Julian is such a nice guy. I actually found him to be more interesting to read about, though. The chapters alternate between Day’s narration and Julian’s journal entries, and I liked getting more insight into Julian’s past and how he got to where he was even though some of it was very heartbreaking. He had a horrible family life as a child, and I really felt for him.

The story itself was very interesting, but not as mystery/thrillery as I expected it to be. I wasn’t biting my nails or wishing I could sleep with the lights on. It was a slower, more controlled mystery. Day goes on a hunt for the truth while hiding Julian in her barn in the backyard. It enjoyed reading his story and what other people had to say about him. His story never quite added up, so I wasn’t really sure I could trust him… and I wanted to slap Day for being SO trusting. He’s a wanted murder suspect! I could have done without the romance… I liked the story more before that happened, but it did add a complicated layer to things and that’s always entertaining. I was definitely eager to get to the end to see how everything turned out.

If you’re in the mood for a whodunit with a Nancy Drew-type detective, some heavier subject matter and a good dose of autumn, give this book a try!

Laurie Faria Stolarz grew up in Salem, MA, attended Merrimack College, and received an MFA in Creative Writing from Emerson College in Boston.

Laurie Faria Stolarz is an American author of young adult fiction novels, best known for her Blue is for Nightmares series. Her works, which feature teenage protagonists, blend elements found in mystery and romance novels.

Stolarz found sales success with her first novel, Blue is for Nightmares, and followed it up with three more titles in the series, White is for Magic, Silver is for Secrets, and Red is for Remembrance, as well as a companion graphic novel, Black is for Beginnings. Stolarz is also the author of the Touch series (Deadly Little Secret, Deadly Little Lies, Deadly Little Games, Deadly Little Voices, and Deadly Little Lessons), as well as Bleed and Project 17. With more than two million books sold worldwide, Stolarz’s titles have been named on various awards list. 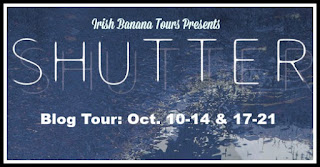 All Our Yesterdays by Cristin Terrill (B

These Broken Stars by Amie Kaufman &