Welcome to my stop along the blog tour for Mila Young’s Apollo Is Mine (book #1 in the Harem of the Gods series), hosted by Rockstar Book Tours! Pardon the late arrival of this post. We had a gmail mishap, and I only just received Mila’s interview today.

I’m excited to have Mila stop by the blog today and participate in this month’s Magic, Myth, & Mischief interview series!

What makes your book magical, mythical, and/or mischievous?
A reviewer recently described Apollo Is Mine as Shadowhunter meets sexy Greek gods with lots of steam! Elyse, the heroine comes from a long lineage of hunters who have been blessed by Zeus to fight mythical creatures that come to Earth to kill humans. They are the last line of defense, except Elyse is the last of her kind, and even supernatural abilities may not be enough when Hades arrives in town with Death right on his heels.

What magical power do you wish you had?
To control water… imagine all the good I could do on Earth :)

If you were a character in a fairy tale/myth, who would you be?
Ariel from Little Mermaid… I grew up loving this fairy tale and have wanted to be a mermaid for ever!! Haha

If you could live in any fairytale or mythical world, which one would you choose to live in and why?
Harry Potter world… of course :P

Hans Christian Andersen, Grimms Brothers, or Disney?
Grimms Brothers… I grew up being told these kind of tales, hence my twisted imagination when it comes to tales :)

Which magical/mythical creatures do you love reading about in books?
Werewolves. Don’t know why but I watch everything and anything on them I can get my hands on .

Who are your favorite villains of lore?
Ursula

Would you rather be a hero or a villain?
Villain

Would you rather be locked up in a tower or a dungeon?
Tower

What elements of the (fairy tale/myth/retelling) did you use when incorporating the tale into your own novel?
I have written my own spin on Red Riding Hood, Aladdin, Beauty and the Beast, Little Mermaid and Rapunzel :) They can be found here.

Which magical/mythical creatures exist in your books?
Oh I definitely have lots… from werewolves, to lion and dragon shifters, to gargoyles and genies, to Greek gods and death casters. 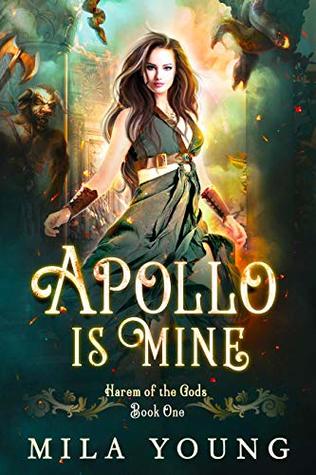 Apollo Is Mine by Mila Young
Series: Harem of The Gods #1
Self-published on September 18, 2018
Add to Goodreads
Amazon

I’m a warrior. Cursed to fight monsters. Sworn to act as Zeus’ sword to protect mankind.

But I’d give it all up for one last kiss with the god who stole my heart…Apollo.

I never wanted to carry my family’s legacy. But blood ties cannot be broken, and I’ll keep the promise I made my father on his dying bed. Legendary monsters hunt in city streets of Chicago, and my job was to take down the worst.

Been blessed with super human powers.

What I’ve never done is fallen in love—until Apollo crossed my path. But he isn’t the only god to catch my attention. Hades is here too, and with him comes a darkness that leaves behind a trail of human bodies. Heracles and my gut instinct urges me to destroy this creature, but each step brings me closer to the truth…

Darkness cannot win…or the Earth will tumble into chaos and I’ll lose the god I’ve come to love…Apollo is mine.

Apollo is Mine is book 1 in the Harem of the Gods reverse harem series.

Content Warning: Steamy love scenes, dominating alphas who protect their female, and plenty of sexy Greek gods who will leave you breathless.

Bestselling Author, Mila Young tackles everything with the zeal and bravado of the fairytale heroes she grew up reading about. She slays monsters, real and imaginary, like there’s no tomorrow.

By day she rocks a keyboard as a marketing extraordinaire. At night she battles with her might pen-sword, creating fairytale retellings, and sexy ever after tales. In her spare time, she loves pretending she’s a mighty warrior, walks on the beach with her dogs, cuddling up with her cats, and devouring every fantasy tale she can get her pinkies on.