Even as a struggling opera singer, Paige Marshall has never seen anything like the cutthroat competition of the Prospect Glen High School show choir. Coaching these championship-hungry students may be her toughest gig yet...

Especially when her best young male singer is suspected of killing the arrogant coach of Prospect Glen's fiercest rival. To clear his name, Paige will have to sort through a chorus of suspects, and go note-for-note with a killer who wants her out of the spotlight for good.

Welcome to today’s stop on the JKS Communications virtual book tour for Joelle Charbonneau’s newest book, Murder for Choir, a cozy mystery filled with singing, dancing, competition, and intrigue. I’m so glad you stopped by!

Seeing as how I was a show choir girl all through high school and college, I was incredibly excited to find a mystery novel that centered around such a fun time in my life. It was also nice to step away from the young adult books for a little while and read about people closer to my age. As always my main points are bolded. :)

1. I think the idea for this book was fun and unique. You can do a lot with a show choir, and there are a lot of story elements you can tackle. I’ve never watched the TV show Glee, but a blurb on the cover said, “Imagine if Stephanie Plum joined the cast of Glee…” I’ve also never read a Stephanie Plum novel! Haha. So, I can’t agree or disagree. Perhaps this will give you an idea, though, of what the book is like. :)

2. Paige Marshall is one of those characters that you want to either scream at or be best friends with. On the one hand, she’s always getting herself into trouble. She’s that heroine in the movies who walks out in the dark in her socks because she thinks she heard someone out there. You want to yell at her, “GET INSIDE, DUMMY!” I feel like she was lacking in basic, common sense. It got her in trouble. On the other hand, though, she’s sweet and is doing all of this to save a teenage boy who was accused of murder. She had good intentions, so I guess I can look past that. Haha. She’s also pretty funny.

3. Paige’s three co-workers: Devlyn (my favorite), Larry, and Felicia, were great characters. They were all very different from one another, with dynamic personalities, which was really nice. Sometimes supporting characters are boring and kind of mush together. I really liked them, though, except for officer Mike. I did not like him at all. Throughout the entire book he seemed aloof and unorganized. Plus, he seemed to be a total playboy. Paige’s Aunt Millie was a little over the top for me. She kind of reminds me of Richard’s mother in the TV show, Castle, if you’re familiar with that: tacky clothes, money, a Mark Kay pink Cadillac, and a pushy personality. Both women love their families, though, which is why I can let the tackiness slide and adore them both. And I must admit, Millie was hilarious. Her taxidermy pets and pink platform shoes were heartwarming.

4. The mystery was very intriguing, but not entirely realistic to me. Paige, a teacher, took the police investigation on herself and ended up getting into a lot of trouble. She should have been arrested so many times for interfering with a police investigation, but she never did. If you can look past the fact that this all would most likely never happen, and just enjoy the story for what it is you’ll be fine. :) I had to keep reminding myself of this throughout the book. I guess I watch too much CIS/NCIS/Castle/Blue Bloods. I just wasn’t buying it.

5. Regardless of my former point, I was kept guessing on who did it until about the last quarter of the book. I actually figured it out before Paige did, which made me really proud of myself! Usually the ending is a surprise to me.

6. Maybe I was just lucky, but my show choir experiences were not this cut throat and ruthless. Directors did not have to sleep with adjudicators in order to get higher scores or placements. Students did not wish someone dead or threaten people in the hopes of winning a competition or getting ahead. We all just liked each other and enjoyed the music we made together. So to me, this also felt unrealistic. But the author is a major musician and performer, so maybe she saw this kind of thing happen in her choral experiences. I was just surprised. Haha.

Overall, this is a fun little mystery. I enjoyed the characters and the basic plot line. Joelle is a great storyteller, and I enjoyed her writing style. While I found things to be a little unrealistic, once I looked past that and just focused on the story I began to enjoy it more. Was it my favorite book? No. But I would recommend it to people who love mysteries, a little romance, a little suspense, and choral singing. 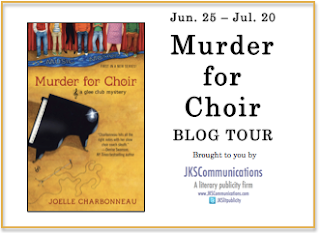 Head on over to the other stops on this tour for more reviews, author interviews and guest posts, and more giveaways!