When thirty-year-old English teacher Anna Emerson is offered a job tutoring T.J. Callahan at his family's summer rental in the Maldives, she accepts without hesitation; a working vacation on a tropical island trumps the library any day. T.J. Callahan has no desire to leave town, not that anyone asked him. He's almost seventeen and if having cancer wasn't bad enough, now he has to spend his first summer in remission with his family - and a stack of overdue assignments - instead of his friends.

Anna and T.J. are en route to join T.J.'s family in the Maldives when the pilot of their seaplane suffers a fatal heart attack and crash-lands in the Indian Ocean. Adrift in shark-infested waters, their life jackets keep them afloat until they make it to the shore of an uninhabited island.

Now Anna and T.J. just want to survive and they must work together to obtain water, food, fire, and shelter. Their basic needs might be met but as the days turn to weeks, and then months, the castaways encounter plenty of other obstacles, including violent tropical storms, the many dangers lurking in the sea, and the possibility that T.J.'s cancer could return. As T.J. celebrates yet another birthday on the island, Anna begins to wonder if the biggest challenge of all might be living with a boy who is gradually becoming a man.

I was pretty leery of this book. A 33-year-old woman and a 17-year-old boy? I was worried it would be written in a tasteless way, or that it would seem creepy. I was also worried that this book would be as boring as the movie Castaway. Nothing against the movie, but only so much can happen on an island. Gilligan’s Island was entertaining, but it was because of all the shenanigans. I was worried this would be either boring or cheesy. It definitely was not either of those things. As always, my main points are bolded. :)

1. The age difference is not weird, nor is it a big deal. Nothing happens until TJ is almost 19, so don’t worry. He has been through and conquered cancer, and he’s surviving on an island. He is very mature and has a lot of life experience. You will not be weirded out by this concept. I’m mentioning this first because it was the first thing that scared me about this book. Haha.

2. I was hooked from the first page and read over half of the book in one sitting. The beginning is particularly intense, as the plane crash and the process of making it to shore is pretty crazy. The whole book is intense, to be honest. I mean, these two went through everything! Health issues, vicious wildlife, constant worry, depression, etc. I seriously was hooked. I kept saying to myself, “Just one more chapter. Then I’ll go to sleep.”

3. I really liked the two main characters. They strengthened each other and became very close. Anna is smart and caring. She was a mother figure to TJ until he grew up. TJ is strong and incredibly mature. He really takes care of Anna. Their relationship was really very sweet, as it formed from a bond that most people will never understand. I appreciated that they waited on being intimate until TJ was the proper age. If it had happened when they first crashed and he was 16, I would have probably quit reading. I’m not going to spoil anything for you, but let me just say that some of the biggest obstacles they dealt with were not on the island. But they stuck together and pulled through. I love a strong set of characters, and these are probably some of the strongest I’ve ever read about.

4. The narration alternates back and forth between the two characters, allowing us to read what’s going on through both their minds. I loved that.

5. The descriptions of the island and the weather were very detailed and well done. I felt like I was there. Also, the intense moments (like animal attacks) were so intense that I almost quit blinking. I loved how the author took me to the exact moment and dropped me in the middle of it.

6. Remember how I said, “Only so much can happen on an island?” I was wrong! I read through years of these two and their island happenings, and I didn’t get bored once. That takes extreme talent on the author’s part. When over half the book consists of two people, an island, and nature, you would think there’s not much to work with. Things could get boring and repetitive really fast. The conversations and critical events kept me wondering what was going to happen next, and I actually wished that more of the book took place on the island.

7. The writing is flawless. I can’t believe it’s Tracey’s first book! Really, it was beautiful.

8. This book pulled intense emotions out of me. I was scared for these two, and I felt the love they had for each other. Their story is very moving–how they relied so heavily on each other, how they could not think of losing one another, how as long as they were together they would be ok. I mean, they were each others’ reasons for surviving. Talk about intense emotion. If someone got sick or hurt, the other one immediately dreaded life. And I was there for the whole thing. I felt all of it, and it was powerful.

9. There were funny moments too, don’t get me wrong. I laughed at some of the things they said to each other. I laughed at the chicken named “Chicken” who they adopted as a pet. I mean, the little guy curled up in Anna’s lap! How whimsical! They played with dolphins in the lagoon almost every day. And before they acted upon it, the sexual tension and the things they said to each other were hilarious.

10. I appreciated the authenticity of the story. Tracey did not sugarcoat anything. She made things seem believable. I mean, if you’re stranded on an island for a few years, you’re going to deal with gross hygiene, bad diet, crummy weather, sickness, and other dangers. This could really happen, and I think that’s part of why I loved it so much.

11. Everything was resolved. Have you ever read a book and flipped out because the ending just sucked? This ending did not suck at all. I loved it. You will too.

Overall, I am so glad I took a leap of faith with this book. I loved it. The writing was amazing, the story inspiring, and the characters well-rounded and loveable. It’s during instances like this one when I realize how truly grateful I am to be a book blogger. I’m exposed to lesser-known novels all the time, and most of them (like this one) deserve much more recognition. It’s an honor to be able to help spread the word when a book is this good. I’d recommend this to anyone who enjoys a good romance mixed with a ton of action, excitement, intrigue, and exotic places.

EDIT: I just noticed how many times I said “intense”. Oh. My. Gosh.

This tour runs through March 9th. To follow the other tour stops, which include author interviews, book excerpts, giveaways, and more reviews, click here. 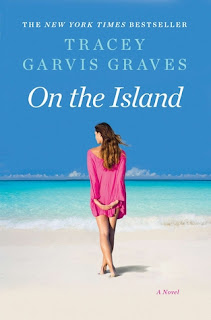 Edit (June 13, 2012) – Tracey has announced on her blog, that Plume (an imprint of Penguin) bought On the Island, designed a new cover, and are publishing it! Her next novel was also bought up. She’s no longer a self-published author! I am SO excited for her, and so happy I was able to help get the word out about this book so many months ago. I love, LOVE this story and am SO excited about what’s in store for Tracey as a result!

Every Time I Think of You by Tracey Garv