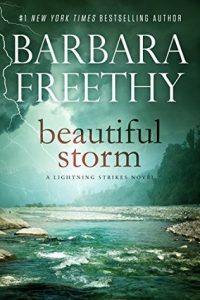 When her father's plane mysteriously disappeared in the middle of an electrical storm, Alicia Monroe became obsessed with lightning. Now a news photographer in Miami, Alicia covers local stories by day and chases storms at night. In a flash of lightning, she sees what appears to be a murder, but when she gets to the scene, there is no body, only a military tag belonging to Liliana Valdez, a woman who has been missing for over a year. While the police use the tag to jumpstart their stalled investigation, Alicia sets off on her own to find the missing woman. Her search takes her into the heart of Miami's Cuban-American community where she meets the attractive but brooding Michael Cordero, who has his own demons to vanquish. Soon Alicia and Michael are not just trying to save Liliana's life but also their own, as someone will do anything to protect a dark secret…

So… There are TONS of Barbara Freethy books out there and I’ve always been intrigued. Many of the story lines sound good, and I’ve collected her titles as I’ve seen them show up for free on Amazon. I had a hankering for a little romantic suspense and was eager to finally see if Freethy is an author for me. And… nope. She’s not.

The mysticism of the lightning was just a bit too over the top for me. The lightning calls Alicia to it because it wants to show her something? No… And I did not like the relationship between the two main characters. Plus, how dumb is Alicia? Michael is a person of interest in this case. He’s a suspect with a troubled past and a reputation. She has known him for a few hours and all of a sudden wants to shove herself into his life and his family to try and find his missing friend. She FLIES with him to Texas and stays in an ADJOINING ROOM after knowing him for like 12 hours. WHAT. She also has no problems at all voicing her opinions to his family and his friend’s family about things she has no right knowing about, much less has the ability to know about. She’s been a part of this case for a few HOURS and does not know anyone involved. They have been grieving and searching for MONTHS and have known the missing person and the people involved for lifetimes. So all because Alicia found a military ID in a park, she knows everything about the case? There was also some major instalove/lust going on that I was not on board with.

The dialogue was cringeworthy. Almost everything anyone said to anyone included their name. It kind of went like this:

Like… I went through and started counting the number of names used in the dialogue on each page and it was just awful! That’s not how people talk to one another, and I felt like the author legitimately thought that we were too dumb to follow the dialogue on our own so she used all the names to try and make sure we knew who was talking to whom.

The mystery itself was very boring and slow and I started skimming because I was mildly curious about what happened. But by about 60% my curiosity has been killed and I threw in the towel.

So basically, this was a complete and total flop. It was horrible. Maybe now I know why Freethy books are in abundance and I can almost always find one for free or very cheap… At least now I know.

Hello!! Remember me!? I’m the person who you think fell off the Internet. I’m here! I’m just having trouble finding my blogging mojo at the moment. I’m reading, but I’m months behind on writing reviews. I’m staying on top of the Debut Author Challenge, but not as much as I’d like. What’s happening to me!?

We all know I’ve been in grad school the last 3.5 years, so the blog took a back seat in my life. But I graduated in December! But then I went to Hawaii and California for a month. But I’ve been home!! I’ve been reading!! What’s going on? I still love reading and blogging, so that’s not the issue. I’m not going anywhere, so it’s not like I’m phasing myself out.

What do I do?? Has this happened to you? Any tips for getting a handle on the reviews I still need to write? How do I make blogging a priority again? Every time I think of sitting down to write a review I go to Netflix or play Two Dots on my phone because I’m great at adulting and being responsible. I used to be so ON IT. Anyone else feeling this way? I need some help. Or a blogging intervention.

Throw your thoughts at me, and while you’re at it tell me what you’ve been up to!