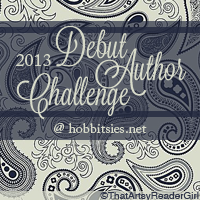 I’m so excited to be participating in the Debut Author Challenge, hosted by Tara at Hobbitsies, 2013! And I was also incredibly honored when Tara wrote and asked me to design the buttons for this year! 2013 is already looking like it’s going to be full of amazingly wonderful debut authors, and I know I’ll be shoving as many of them into my reading list as possible. I love supporting new authors! Anyway, here’s my list of DAC hopefuls, although I’m sure I’ll be editing this (and adding to it) as time goes on.