Stacking the Shelves is a weekly meme hosted by Tynga’s Reviews, where we get to show off all the exciting books we’ve added to our shelves! It’s a fun way to express our excitement over books we might not be able to review for a while. :)

So, this is my very first time participating in Stacking the Shelves! It’s been a while since I’ve shared my acquired books. With the awesome deals online right now, I’m excited to show you all what I got! 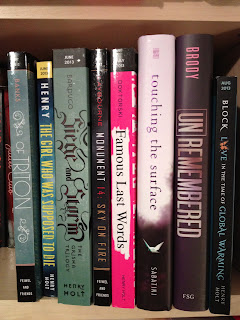 Of Triton by Anna Banks
The Girl Who Was Supposed to Die by April Henry
Siege and Storm by Leigh Bardugo
Monument 14: Sky on Fire by Emmy Laybourne
Famous Last Words by Jennifer Salvato Doktorski
Touching the Surface by Kimberly Sabatini (watch for my review and giveaway tomorrow!)
Unremembered by Jessica Brody (this was actually a gift from Macmillan for participating in the blog tour!)
Love in the Time of Global Warming by Francesca Lia Block

Not pictured (because they are ebooks):

True by Erin McCarthy
Tempest Revealed by Tracy Deebs
The Secret Ingredient by Stewart Lewis
Dare You To by Katie McGarry
Burning by Elana K. Arnold
The Deepest Night by Shana Abe
The Sweetest Dark by Shana Abe
The Fairest of them All by Carolyn Turgeon
Two Lies and a Spy by Kat Carlton
Towering by Alex Flinn
Reboot by Amy Tintera
Golden by Jessi Kirby
Girl Vs. Earl by Phillippa Ashley 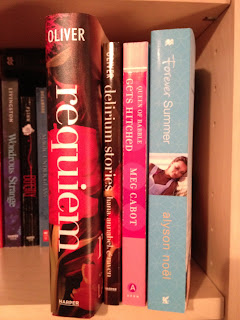 Not pictured (because they are ebooks):

Eleanor and Park by Rainbow Rowell
This is What Happy Looks Like by Jennifer E. Smith
Tiger Lily by Jodi Lynn Anderson
Being Friends with Boys by Terra Elan McVoy
Confessions of a Call Center Gal by Lisa Lim 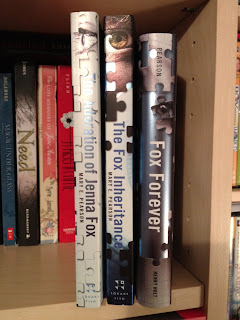 Thanks to Brittany at The Book Addict’s Guide for hosting the giveaway!

So, what have you gotten recently? Link me, and I’ll come visit!