In Beatrice Prior's dystopian Chicago world, society is divided into five factions, each dedicated to the cultivation of a particular virtue--Candor (the honest), Abnegation (the selfless), Dauntless (the brave), Amity (the peaceful), and Erudite (the intelligent). On an appointed day of every year, all sixteen-year-olds must select the faction to which they will devote the rest of their lives. For Beatrice, the decision is between staying with her family and being who she really is--she can't have both. So she makes a choice that surprises everyone, including herself.

During the highly competitive initiation that follows, Beatrice renames herself Tris and struggles alongside her fellow initiates to live out the choice they have made. Together they must undergo extreme physical tests of endurance and intense psychological simulations, some with devastating consequences. As initiation transforms them all, Tris must determine who her friends really are--and where, exactly, a romance with a sometimes fascinating, sometimes exasperating boy fits into the life she's chosen. But Tris also has a secret, one she's kept hidden from everyone because she's been warned it can mean death. And as she discovers unrest and growing conflict that threaten to unravel her seemingly perfect society, she also learns that her secret might help her save those she loves . . . or it might destroy her.

I finally did it, guys! Wooo! Well, I really must credit Daisy with this one because she came up with the awesome idea of reading Divergent together. I rarely give myself the time to read books that I have not been sent for review, so it was a lot of fun to get the chance to read it! It was a bit slow-going for me at first, but I ended up really loving it, and can’t wait to get my hands on Insurgent!

1. I was really worried that Divergent would not live up to the hype. I’ve been hearing about this book for almost two years now, so I was pretty scared of it. Honestly, though, it deserves all the recognition it has gotten! And finally we have a book that does not pale in comparison to The Hunger Games.

2. I love Veronia’s storytelling, and her way with words. She has written some beautiful passages and thought-provoking one-liners. A huge part of Divergent deals with simulations that mimic reality, placing characters in uncomfortable situations. Not only did I feel transported to these alternate realities, but I felt everything the characters felt. I loved being so submerged in these peoples’ lives, as I got to learn so much about them as a result.

3. I really like Beatrice/Tris. She comes from the selfless faction, where life is easy but dull. It took a lot of courage for her to choose Dauntless, and I really liked following her through her initiation. She grew so much, and learned a lot about what the world is like. She ate her first hamburger! She got to experience new things, feel new emotions, discover her fears and learn to conquer them, develop new desires for her life, and strengthen herself physically, mentally, and emotionally. The girl who wore her shirts buttoned up to the neck, no make-up, and her hair in a bun is getting tattoos, wearing tank tops and eyeliner, sticking up for herself, and fighting like a boss! I was so proud of her.

4. Four. Hello. I love this guy (and he’s front and center because there’s no love triangle!! Yay!!). He’s brave and fearless and mysterious, yet tender and romantic at the same time. And, oh man, parts of his story just killed me! KILLED ME. He says some of the sweetest things:

“I might be in love with you.” He smiles a little. “I’m waiting until I’m sure to tell you, though.”

5. SO many feelings. I love many of these characters, some more than others. And the things they do just KILL me! There’s bullying, hate, fighting, murder, attempted murder, abuse. Yet I love these people, even if I actually love to hate them. And I just want to smack all of them for being such idiots sometimes! With all of this brings the drama and the growth, though, so I know it has to happen. But yeah, I felt everything. And I would be so sad and then so happy! I was all over the place with this one, but it was great!

6. Yes, I did have a hard time in the beginning. I can’t quite put my finger on what it was, but things really picked up for me as I went further along!

Wow, that was a short review. All in all, I loved Divergent! I can’t believe I waited this long, but at the same time I’m glad I did because Insurgent is already out and Allegiant will be out SO soon. So I don’t have to wait long to finish this trilogy at all! I love Tris and Four, I love all the action and emotions, and I am SO excited to see what happens next! 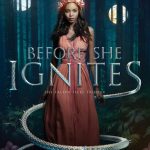 Before She Ignites by Jodi Meadows | Blo