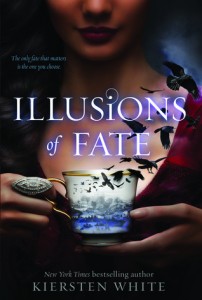 Jessamin has been an outcast since she moved from her island home of Melei to the dreary country of Albion. Everything changes when she meets Finn, a gorgeous, enigmatic young lord who introduces her to the secret world of Albion’s nobility, a world that has everything Jessamin doesn’t—power, money, status…and magic. But Finn has secrets of his own, dangerous secrets that the vicious Lord Downpike will do anything to possess. Unless Jessamin, armed only with her wits and her determination, can stop him.

I had not heard much about Illusions of Fate, but I thought it sounded like something right up my alley. I’ve been on a bit of a fantasy kick lately, and that cover is amazing. Then I heard from Jamie that Stephanie Perkins highly recommends it, and I pushed it right to the top! I loved the idea of magic being a huge story element, so I was excited to begin. As always, my main points are bolded. :)

2. The nobility are the ones who hold magical powers! I felt like part of this exclusive club that I was let in on this secret, along with Jessamin. Different people hold and develop different powers, so no two nobles are the same. I liked that.

3. Jessamin is a very exotic-looking girl from the island of Melei, who comes to Albion to study at a prestigious school. Think Oxford. People from her island are not well-liked, so she is a bit of an outsider. She sure does catch the eye of Finn, aka Lord Ackerly. Something extremely romantic and rare happens between the two of him, and he is immediately captivated by her. His arch nemesis, Lord Downpike, has finally found Finn’s weakness. It’s Jessamin. She’s very spunky and not the kind of girl who sits back and lets people protect her, much to Finn’s chagrin.

4. Finn is super swoony. He’s 19, but not. And he’s so proper and romantic. And chivalrous. With these proper mannerisms and personality traits, though, he was not incredibly open with his feelings, which was a bit disappointing. He reminded me a tiny bit of Mr. Darcy. But just a tiny bit. He’s broody and opinionated and stubborn. But not as romantic.

5. I simply adored Jessamin’s friend, Eleanor. I could not get enough of her! She’s hysterical, and so much fun. I would love it if she would get her own book.

6. I think my favorite part of the story is the beginning. Everything is super mysterious and intriguing. Books are hawks as well. Who is Lord Ackerly? What is Lord Downpike hiding? Why does Finn’s house have so many doors that lead to random places? And the feeling of the book was just a bit eery and unsettling.

7. As the book moved forward, mysteries were solved very quickly, and information was kind of dumped on us. I began to get a little bored also, when things quit happening. The beginning was exciting, and there were all these ominous feelings going on. But then the excitement stopped for a while and I felt like I kept reading the same scenes over and over again.

6. I think the book was too short for the story it had to tell. I would have loved a more developed Albion, more depth to the characters (Finn has lived a LOT), and less of an easy and predictable ending. I think this might be one of the very few situations where I actually wanted a sequel. It was all just too formulaic, which was disappointing because the idea was super unique and could have been played with a lot more.

All in all, Illusions of Fate was a fun read. While it could not hold a candle to some of my favorite fantasies, it does have some unique elements that made it a worthwhile read. If you’re looking for a standalone fantasy, with a little mystery and romance I would have no problems recommending Illusions of Fate. While it lacks strong world building, there is a character named Sir Bird that I’m sure you’ll be fond of. 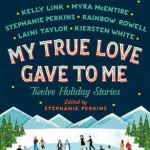 My True Love Gave to Me: Twelve Holiday

Under the Never Sky by Veronica Rossi (B

4 responses to “Illusions of Fate by Kiersten White | Book Review”