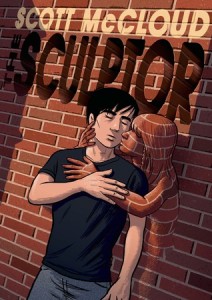 David Smith is giving his life for his art—literally. Thanks to a deal with Death, the young sculptor gets his childhood wish: to sculpt anything he can imagine with his bare hands. But now that he only has 200 days to live, deciding what to create is harder than he thought, and discovering the love of his life at the 11th hour isn't making it any easier!

This is a story of desire taken to the edge of reason and beyond; of the frantic, clumsy dance steps of young love; and a gorgeous, street-level portrait of the world's greatest city. It's about the small, warm, human moments of everyday life…and the great surging forces that lie just under the surface. Scott McCloud wrote the book on how comics work; now he vaults into great fiction with a breathtaking, funny, and unforgettable new work.

The illustrations are well done, and convey a lot of emotion and add a lot to the story, making it more powerful than if words were used alone. I was initially very attracted to the artsy storyline. I was just expecting it to resonate with me more than it did. Being an artist myself, I connected only a little bit (but then again, I am not the stereotypical starving, troubled, tormented artist). David’s favorite medium is stone… so why is he happy when he can work with it as if it were play dough? The best part of art (for an artist) is the creative process. I would imagine that Michelangelo would have been upset if he’d been forced to mold David instead of carve him. I don’t see this as a good deal, especially since he’s traded his life for it. So basically, the plot just did not make sense to me as an artist. I did like the underlying theme of living on borrowed time and what that means, though.

I did not love the characters. I found David to be whiny and selfish and vain, found his character to be very uninspiring. His deal with Death comes from a selfish, egotistical place, and he only gets worse as the story goes on. He does not learn and/or grow. He turns his love, Meg, into a vessel instead of a person, which bothered me a lot.

(This book contains R-rated content and graphic images of nudity and sexual situations. You’ve been warned!)