Welcome to my spot along the Spark blog tour, hosted by The Irish Banana Review! I’m pleased to turn the blog over to the author of Spark, Holly Schindler, for a guest post.

I asked Holly:
If you could write yourself into Spark,
what kind of character would you be and why?

Following her post, read all about Spark and enter to win one of three finished copies of the book!

Holly Schindler on Her Place in Spark

In many ways, I did write myself into SPARK. I’m a little bit Quin—I’ve worn glasses since I was nine, and I’ve always been a giant reader, always written. (I was writing stories at my child-sized rolltop desk when I was a little girl!)

I’m also a little bit Cass—I’m a music junkie, and have always loved anything vintage. In high school, I wore more vintage clothes than new.

And I’m a little bit Dylan—I was a really shy kid. You definitely didn’t hear my voice much in class. I’m not a stutterer—I didn’t have the same reason not to be a big talker—but I do know what it’s like to feel like the quiet one in a giant group of more extraverted classmates.

…And that brings me to one of the central themes of SPARK: Growing up, I also felt, just like all the kids in Advanced Drama, what it was like to be full of flaws. But the thing is, we ALL have flaws. Or at least, perceived flaws, both internal and external. We all have that voice inside our head that says we’re not quite good enough—that’s constantly musing about how great it would be to snap our fingers and fix our shortcomings.

SPARK encourages readers to imagine what it would be like if you could magically erase your flaws. 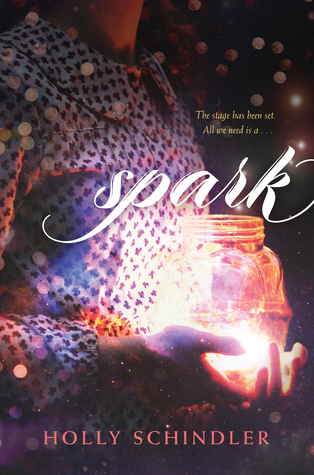 The local Avery Theater was just a run-down building to Quin—until her mother told her the tragic love story of Nick and Emma that played out on the theater’s stage all those years ago. Quin is convinced it’s the perfect story to rewrite for her drama class, but when she goes searching for more information, she makes a startling discovery—the Avery is rapidly regaining its former splendor and setting the stage for her classmates Dylan and Cass to relive Nick and Emma’s romance. Quin can see the spark between them, but it’s up to her to make sure her friends—and the Avery—can both be saved this time around.

I’m a hybrid author of critically acclaimed traditionally published and Amazon bestselling independently published works for readers of all ages. My previous YAs (A BLUE SO DARK, PLAYING HURT, and FERAL) have received starred reviews from Booklist and Publishers Weekly, won silver and gold medals from ForeWord Reviews Book of the Year and the IPPY Awards, respectively, been featured on Booklist’s First Novels for Youth, School Library Journal’s “What’s Hot in YA,” and been selected as a PW Pick.

Going hybrid means that I’ve been able to explore all sorts of new avenues—short fiction, sequels, I’m even going to be branching out into doing some illustrative work. Throughout 2016, I’m releasing one short story a month in the Forever Finley Short Story Cycle. The cycle begins with “Come December”.

Also, in honor of SPARK’s release, Holly is holding a sale on PLAY IT AGAIN, the sequel to her YA romance, PLAYING HURT. For a limited time, PLAY IT AGAIN is $.99.