I hope you’re enjoying A Week of Beauty and Beast, a special blog event hosted by Bonnie at A Backwards Story and me! We thought this would be the perfect time to host an event devoted to one of our favorite fairy tales, seeing as how Disney’s live action Beauty and the Beast is coming out in theaters on Friday! Woohoo! We’re excited to share our love of this tale as old as time with you, and hope you enjoy what we have planned! Make sure you enter to win a Beauty and the Beast themed book of your choice. And if you want to join in on the fun, link up your B&B themed posts so we can come see!

Today Bonnie and I are hosting an interview with Zoë Marriott, author Barefoot On the Wind. Barefoot On the Wind is a beautiful retelling of Beauty and the Beast set in Japan. It’s the second book in Zoë’s The Moonlit Lands series, but it can be read as a standalone. As per usual, we’ve split the interview between our two blogs. When you’re done here, head over to A Backwards Story to read the rest!

What inspired you to reinterpret Beauty and the Beast?

Beauty and the Beast is one of my all time favourite fairytales. I read Robin McKinley’s YA classic Beauty at around age eleven, which was same year that I first saw Disney’s version of the story. These wonderful retellings made a massive impression. They’re the reason I started my career as a YA writer with a fairytale retelling of Hans Christian Andersen’s The Wild Swans. I never felt equal to the challenge of writing my own re-telling of Beauty and the Beast, though; it seemed as if the tale had been told so well by others that there was nothing else to say. But one day I pulled out my favourite fairytale read, Robin McKinley’s Beauty, and suddenly it struck me that the Beast, my ideal fictional hero since I was eleven… doesn’t really act like much of a hero at several points in the story.

Because, you see, Beauty and the Beast is supposed to be about true love. About learning to perceive and value inner beauty. Which is great, and all that. BUT. It’s actually the heroine Beauty who is asked to learn this lesson, despite being blameless. She’s the one who’s asked to love a Beast. That seems a bit unfair? Especially when the Beast – the one who is supposed to be learning not to be so cruel and shallow – imprisons her for months at a time with only a single week’s leave, until she finally agrees to marry him. He never has to learn to see beyond Beauty’s outer appearance. She’s already physically lovely. She’s also kind, good and loving, but the Beast doesn’t care about that when he arranges to lock her up. He just wants someone, anyone, to marry him and break the curse.

All these years we’ve been told the story is about true love conquering all. But really, when you get right down to it, it’s about using coercion to get your own way and being rewarded for it. Although Beauty is still my favourite comfort read because Robin McKinley’s writing is so amazing that she makes you forgive the Beast, I felt… disturbed. That was the seed that grew into BAREFOOT ON THE WIND.

Would you rather have The Rose or The Mirror in your Bedroom?

Neither, thanks! Those would both be a sign that I’ve done something very wrong and was living under a curse. I prefer a peaceful sleeping environment.

If you could be a household object, what would you be?

A pen! One that never runs out.

If you were taken by the Beast, what’s one comfort item from home that you’d want?

My ereader! So long as I could keep charging it up and downloading new books, of course.

What song would you want to dance to with the Beast?

I Will Follow You Into the Dark by Death Cab for Cutie. Or A Thousand Years by Christina Perri. Or No One’s Gonna Love You by Band of Horses. Or Brightly by Sleeping At Last. Or Hex, by Mt. Wolf. Or…. well, you get the idea.

If you looked in a magical mirror that would show you your heart’s desire, what would you see?

Harry Potter special. I’d see my father, my lovely dog Finn, and all the other people and pets I’ve loved and had to say goodbye to over the years.

Read the rest of the interview here! 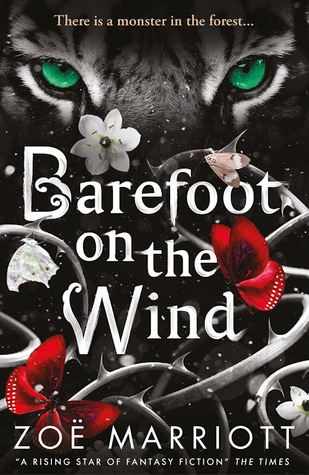 Barefoot On the Wind by Zoë Marriott
September 1, 2016 by Walker Books
Series: The Moonlit Lands #2
Add to Goodreads | Buy from Book Depository (currently not available in the USA)

A companion title to Zoë Marriott’s critically acclaimed Shadows on the Moon, BAREFOOT ON THE WIND is a darkly magical retelling of “Beauty and the Beast” set in fairytale Japan.

There is a monster in the forest…

Everyone in Hana’s remote village on the mountain knows that straying too far into the woods is a death sentence. When Hana’s father goes missing, she is the only one who dares try to save him. Taking up her hunting gear, she goes in search of the beast, determined to kill it – or be killed herself.

But the forest contains more secrets, more magic and more darkness than Hana could ever have imagined. And the beast is not at all what she expects…

I’ve known that I wanted to be a writer since I finished reading my first book; ‘The Magic Faraway Tree’ by Enid Blyton. I think I was about eight, but I’ve never changed my mind in all the years since then.

I got my first publishing contract when I was twenty-two, but had to wait until I was twenty-four to see that book published (it was The Swan Kingdom).

I live in a little house in a town by the sea, with my two rescued cats, one called Hero after a Shakespearian character and one Echo after a nymph from a Greek myth. I also have a springer/cocker spaniel called Finbar (otherwise known as The Devil Hound). There’s a picture of him on the left.