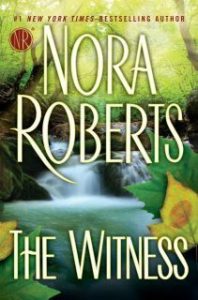 Daughter of a controlling mother, Elizabeth finally let loose one night, drinking at a nightclub and allowing a strange man’s seductive Russian accent lure her to a house on Lake Shore Drive. The events that followed changed her life forever.

Twelve years later, the woman known as Abigail Lowery lives on the outskirts of a small town in the Ozarks. A freelance programmer, she designs sophisticated security  systems—and supplements her own security with a fierce dog and an assortment of firearms. She keeps to herself, saying little, revealing nothing. But Abigail’s reserve only intrigues police chief Brooks Gleason. Her logical mind, her secretive nature, and her unromantic viewpoints leave him fascinated but frustrated. He suspects that Abigail needs protection from something—and that her elaborate defenses hide a story that must be revealed.

With a quirky, unforgettable heroine and a pulse-pounding plotline, Nora Roberts presents a riveting new read that cements her place as today’s most reliably entertaining thriller
author—and will leave people hungering for more.

All I can really say about this book is, “Well… crap.” I love romantic suspense, and I’ve been really hunting for good titles all summer. I found a list of the best romantic suspense books, and this one was rated pretty highly and voted on by like 78 people. It’s got a 4.18 star rating average on Goodreads, with over 49,000 ratings, so I thought I was golden! But guys. This is not romantic suspense! It was hardly romantic, and it was not at all suspenseful. It was a huge disappointment. As always, my main points are bolded.

1. Things start out very interesting, and I was definitely intrigued. The book begins with Elizabeth rebelling against her mother and making huge changes to her life. She cuts her hair, gets a new wardrobe, decides to change her educational and career path, and uses her own homemade fake ID to get into a very exclusive nightclub owned by some very dangerous men. These men set their sights on Liz and her friend, lure them back to an isolated home on the water, and all Hell breaks loose. Liz barely survives, gets put into witness protection, and all Hell breaks loose again. This girl has some pretty terrible luck.

2. Then… we shoot to 12 years later. And I realize rather quickly that I do not like Liz, now Abigail, at ALL. She’s very smart and independent, which is great. But she has no personality. She has isolated herself ever since the events of her youth, and she does not know how to socialize. She has no sense of humor, no emotions, no feelings. She’s very analytical and scientific about things that are neither. And of course I can understand this, given everything she has been through, but she just was not an interesting character to read about at all. I could not connect with her in any sort of way.

3. Brooks is a horrible main character/love interest. Of all the people to un-isolate yourself for and try to connect with, Abigail chose HIM!? Is she just trying to make her life suck more? He pursued and bugged her so much, pushing himself into her life when she so clearly had no interest in having him there. It bothered me so much that he refused to take no for an answer. And then when she wouldn’t let him in, he went and started researching her to try and figure out what she was hiding. Because there just HAD to be a reason for her to not want him around other than he fact that he sucks, right? Because what woman wouldn’t want him?

Brooks is also incredibly condescending and chauvinistic. For example, there is one moment when he pulls Abigail to her feet and demands respect. Then, he tells her she’s insulting him for being concerned that he might not love her if he knew the truth about her past. This woman does not know how to love, she has never been loved or loved anyone in her life and he was SO rude in the face of her legitimate concerns. When she said she was sorry, he said, “Good. You should be.” Then he “yanked” her in for a kiss. In what universe is this romantic? He also has a super dirty mouth and treats Abigail with such clear disrespect. She is his possession. I mean, for goodness SAKES. How many times did I read him refer to Abigail out loud as “my lady”, “my woman”, “my girl”. Grrr!

4. Insta-love. On steroids. You’ve got this awful, pushy man pursuing an extreme recluse who has like a million guns within her reach at all times and a dog that sounds about as big and fierce as a direwolf, yet… she has almost no issue with inviting him in to her place for food and wine and sex. Like… what is happening?? All Abigail’s credibility of being smart and protective of herself went right out the window when she became putty in his hands after a couple days of being talked into not pushing him away. I really felt like Brooks saw Abigail as a challenge to be conquered. A Game to be won. And instead of trying to win the game herself, she just threw in the towel because he’s a big strong man who says nice things to her. UGH.

5. It was SO BORING. By 50%, nothing had happened. There were just so many needless details, many of which were repeated over and over again. Something happens to Brooks at work, we read all about it, and then we read all about it again when he goes home and tells Abigail. We read every. Grueling. Detail again. This book is way too long. For this reason. Just tell the story and get it over with.

6. The writing was annoyingly choppy. It was filled with sentences much like: “Abigail went to the computer, checked her email.” Or “Brooks got in his car, turned it on.” Like, where are the nice, flowing sentences? I almost quit after the first few pages when I saw how often this was happening, but then it got better. And then it got worse. So the author isn’t even being consistent here!

7. The entire story was just so thin. Abigail had been keeping tabs on the bad guys during the last 12 years and anonymously feeding info about them to the FBI to try and take down their crime ring. Finally, she decides she needs to not be anonymous anymore and then everything seamlessly works out. There’s no crazy climax, no suspenseful moment at the end. Just court appearances. Can you hear my eyes rolling? I’m so annoyed I hung in there in the hopes of getting a great moment and it was just easy. I mean, I dealt with pages and pages of hearing the same mindless info about what it’s like to be a police captain. I got to read about everything that happened to Brooks when it happened and then again when he told Abigail about it. But I couldn’t get a satisfying ending as a reward for hanging in there?

So, I guess I’ve got a pretty unpopular opinion here, but I just don’t see any redeeming qualities about this book. The plot was thin, the story was implausible, the characters were awful, and the writing was crappy. Why didn’t I DNF? I’m wondering the same thing. And honestly, I have no idea. It probably had something to do with the fact that it’s NORA ROBERTS and I was giving her too much credit.

3 responses to “The Witness by Nora Roberts | Book Review”