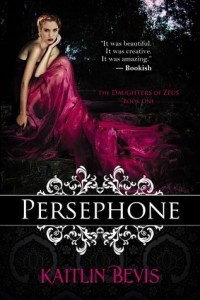 There are worse things than death, worse people too

The “talk” was bad enough, but how many teens get told that they’re a goddess? When her mom tells her, Persephone is sure her mother has lost her mind. It isn’t until Boreas, the god of winter, tries to abduct her that she realizes her mother was telling the truth. Hades rescues her, and in order to safely bring Persephone to the Underworld he marks her as his bride. But Boreas will stop at nothing to get Persephone. Despite her growing feelings for Hades, Persephone wants to return to the living realm. Persephone must find a way to defeat Boreas and reclaim her life.

I love the Greek myth of Persephone, and I really enjoyed this book. If you’re curious about the myth, I explain it right here. Anyway, my main points are bolded. :)

2. I really liked Persephone. She’s a fun character who is reasonably blindsided when she finds out she’s a goddess, and her best friend is actually her priestess. And then when Boreas comes after her and she ends up hiding out in the Underworld with Hades and all the souls, she adapts pretty well! She’s pretty headstrong and spunky, and I liked that about her. I enjoyed watching her learn and change as she came into her own powers at the goddess of spring.

3. Hades is swoony! And honestly, I never thought I’d say that. He’s dark and sensitive, and he loves his library. My kind of guy. He is in charge of helping the souls transition from life to death, and his concern for them is so sweet. I also loved his concern for Persephone. She ended up there with him because he saved her, not because he kidnapped her like the original story goes. This gave the author a lot more to work with, and enabled her to write Hades as a good person. I was pleasantly surprised.

4. The Underworld is amazing. It’s light and beautiful, full of flowers and trees and rivers. The suburbs have cute little colorful houses, they have balls and parties, and people work because they love what they do and not because they have to. If you want a cute outfit, you imagine it and it’s yours. I loved reading about how Persephone decorated her room in the palace there. All she had to do was think about what she wanted, and it was so. She even chose the scenery outside her window. It’s a magical place, and I’d love to see it!

5. One of my favorite twists to the story is the fact that Gods can’t lie. They just can’t. If they say they won’t tell someone something, they are physically incapable of doing so. That created a lot of fun and crazy story lines.

7. The story is written very well, and there’s a lot going on. I enjoyed Kaitlin’s writing style and her descriptions of the world and the powers these gods possess.

8. That ending. Holy moly! It was amazing! I can’t wait to get my hands on the next book!

Persephone might just be my new favorite version of Persephone. Haha. (I wish the title were a little more creative, though! Talking about this book is tricky because you have to differentiate between the myth, the book, and the character.) It’s fresh, it’s unique, it’s suspenseful, and a lot of unexpected and exciting things happen that will leave you craving the next book.

This review was originally posted on September 12, 2013 and is being re-featured.