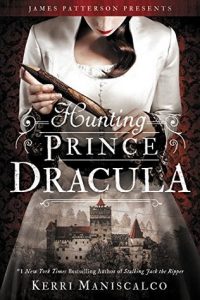 Following the horrifying revelation of Jack the Ripper’s true identity, Audrey Rose Wadsworth flees her home in Victorian London to enroll as the only female student in Europe’s most prestigious forensics school. But it’s impossible to find peace in the dark, unsettling Romanian castle that houses the school—and was also once home to the depraved Vlad the Impaler, otherwise known as Prince Dracula.

When a series of troubling deaths brings whispers of Vlad’s bloodthirsty return from the grave, Audrey Rose and her sharp-witted companion, Thomas Cresswell, must unravel the cryptic clues that will lead them to the shadowlike killer—living or dead.

I absolutely LOVE Dracula stories (which is weird, since I’ve never read Dracula…) and creepy historical fiction, so I was really excited when I learned what the second installment of the Stalking Jack the Ripper series was going to be about. I really, really enjoyed Stalking Jack the Ripper, but I LOVED Hunting Prince Dracula like a million times more. As always, my main points are bolded.

1. Ok, so DRACULA. I love how Kerri tackles old, old mysteries in a way that makes them feel very real instead of over-the-top and silly. The story of Dracula, of course, is fictional. But the character was named after a real man who did enjoy the taste of blood: Vlad the Impaler. So there’s some truth mixed with a ton of fiction, and it was so wonderful seeing how Kerri would spin that. Dracula felt so real to me.

2. The setting of Hunting Prince Dracula is amazing. The story takes place in Vlad’s actual castle in Romania, which is now the home of an elite forensics school that Audrey Rose and Thomas are attending. This castle has secret alcoves hidden by tapestries, secret trap doors and rooms, and a labyrinth of creepy tunnels that you access through the floor in the morgue. It is surrounded by a creepy wood that is rumored to be filled with all manner of scary animals and people. It’s December at the castle, so it’s bitterly cold outside, it gets dark very early, and the entire world is blanketed in snow. Audrey’s rooms are away from the other rooms since she is the only female attending the school, and she hears creepy things outside her door. And on the roof. It’s just so perfectly creepy without keeping me up at night!

“Winding our way through the narrow path, we finally pulled to a blessed stop outside the castle. Fingers of moonlight reached over the spires and slid down the roof, casting our shadows in sinister shapes. This castle was eerie and I haven’t even stepped inside.”

3. Things were so much swoonier (lol. Totally not a word.) between Audrey and Thomas in this novel and I loved it. There’s all this scandalous tension and innuendo between these two! And chemistry! Their banter is amazing, and so perfect. They sneak around through the castle and night to meet up and discuss or explore the castle and its grounds. There are stolen glances and warm thoughts during class and before bed. It’s just so romantic, yet not heavy on romance if that makes sense. You can feel it there, but there’s so much going on that it’s rarely talked about.

4. I just adore Thomas so much. He’s snarky and flirty and tender and romantic. He’s also dapper and intelligent and forward thinking. And he’s so sweet and silly and loyal and has the driest humor. And he’s so protective of Audrey Rose, it just makes me melt. He was my favorite part of this book. I love seeing more and more of who he is.

“I have a feeling you haven’t invited me here for kissing. Though it never hurts to ask. You’re dressed for sneaking about Dracula’s castle. Be still my thawing, dark heart. You certainly know how to make a young man feel alive, Wadsworth.”

“For there are no limits to the stars, their numbers infinite. Which is precisely why I measure my love for you by the stars. An amount too boundless to count.”

5. I liked reading about our flawed Audrey Rose. It’s only been about 2 weeks since the events of Stalking Jack the Ripper, and she’s still processing and coming to terms with how that mystery unfolded. She’s scarred and a little damaged, and I enjoyed watching her find her new normal. I’ve always admired her bravery and desire to push the norm, and she continued that in Hunting Prince Dracula even though her scars tried to prevent it.

6. There were a few scenes that had me ready to run for the hills because they were so scary! Like… spiders… and trees made of bones. The tunnels under the castle are filled with terrifying things that you gradually learn about as the story progresses. Audrey and Thomas spend a fair amount of time exploring, and I could never ever do that. I couldn’t stop reading, but also wanted to cover my eyes at the same time. It was amazing!

8. Kerri’s writing and prose is beautiful perfection. I could swim in her words. I could wrap them around me like a silk scarf.

Bottom line, Hunting Prince Dracula is a new favorite that I kind of want to read every fall now because it’s so perfect for this season. It’s just the kind of book I want to curl up with under a blanket and read while it storms outside. I loved everything about it… the heat between Audrey and Thomas, the setting, the mystery, and Kerri’s beautiful writing style. I will forever recommend this wonderful story! 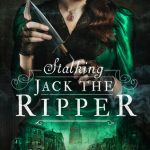