Welcome to my stop along the blog tour for Kay Marie’s Hot Pursuit, hosted by Xpresso Book Tours! I’m excited to share an excerpt of the book with you today to get you even more excited to read Hot Pursuit, which has been marketed as “How to Lose a Guy in 10 Days meets White Collar”. Read more about the book below and make sure you enter to win a $25 Amazon gift card!

He didn’t want to notice the perfect O her plush lips made as she said her name, but he couldn’t control it…or the immediate reaction his body had at the sight. Nate froze, jaw clenching as he fought to control the blood rush coursing to a very distinct place.

His gaze darted to those jade eyes staring up at him, vibrant and sparkling with hidden mirth. He’d always had a weakness for green eyes. And women in barely there red bikinis…

He jerked back, shaking free of her hold.

Jo folded her lips together for a moment, holding back a smile, then licked them slowly. A single brow arched. “You have a name?”

Nate frowned, cleared his tight throat, and nudged his chin in the direction of her jet ski. “I said good day, Miss Carter.”

“No fun,” she sighed with a pout, then smirked. “You know I can find out if I want to, right?”

She can’t seriously be… Nate shook off the thought and pushed his brows together in question. “You wouldn’t be implying what I think you’re implying, would you?”

Her smile widened with an unspoken challenge. “What if I am?”

Nate straightened his spine and crossed his arms over his chest, funneling his disbelief into a stern, scolding expression instead. “Breaking into a government database is a federal crime,” he said calmly, the edge of a threat laced through his tone. “Class B felony, punishable by up to twenty years in prison.”

The flames in the centers of her eyes brightened. “Only if you get caught.”

“Can I tell you a secret, Miss Carter?” Nate murmured, not really sure why he was playing along, but the words tumbled from his lips before he could stop them. Her eager expression intensified. An almost childlike sense of wonder was etched into the grooves of her face as she nodded. He leaned in, just to prove to himself that he could, and forced his rebellious pulse to remain even. Her auburn hair tickled his face as he pressed his lips close enough to feel the heat of her sun-kissed skin. Something in his chest hitched, but he didn’t back down. “Eventually, you always get caught.”

She sucked in a breath. He leaned back just enough to stare into her eyes, not at all liking the defiant golden sparkles dancing at the centers of her irises, flickering like sunshine through a dark forest, brilliant and burning.

The air between them was tense.

A silent battle of wills.

Both fighting for the win.

She opened her mouth to speak, drawing his gaze, and—

“Parker, Alvarez, do you copy? Are you there? Satellite feed says Carter should be in sight momentarily.”

Jo didn’t move except to perk one corner of her plush lips, watching him unflinchingly, victory simmering in her eyes.

“Parker, are you there? Do you copy?”

She turned her head toward the sound and shrugged. “You going to get that?”

Nate took a slow step back, eyes never leaving her for a second. His gun was four feet behind, resting next to Leo’s on the control panel. But his phone was on the table, along with his notes. All within reach of her thieving hands.

A pulse of static coursed through the radio again.

Nate lunged for it. Pressing the button to speak, he kept a laser focus on Jolene Carter, trouble personified. “Here, Boss.”

“Parker, do you see Carter?”

A small smile danced across her lips as she mouthed, Parker. 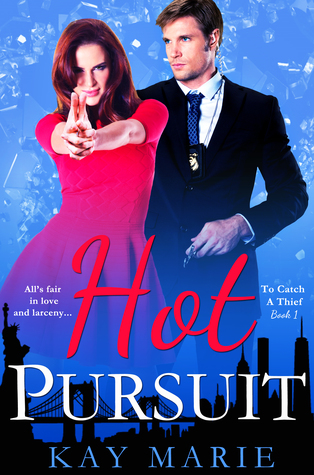 All Jolene Carter has ever wanted is to own a bakery of her own. There’s only one problem. Her father, Robert Carter, is a world-renowned art thief and she’s, well, sort of his protégé. But he’s promised her that this next job in New York will be their last, and she won’t let anyone get in the way of her dreams…especially not the distractingly delicious FBI agent hot on her tail.

Agent Nate Parker has been on the Robert Carter case for years, and if the rumors of the aging criminal’s retirement are true, this might be his last chance to nail him. With the legacy of his late father in the back of his mind, the stakes are more personal than anyone realizes. He won’t let anything stand in the way of justice…especially not the red-headed vixen who keeps giving him the slip.

Always blessed with an overactive imagination, Kaitlyn has been writing ever since she picked up her first crayon and is overjoyed to share her work with the world. When she’s not daydreaming, typing stories, or getting lost in fictional worlds, Kaitlyn can be found playing fetch with her puppy, watching a little too much television, or spending time with her family. If you have any questions for her–about her books, about scheduling an event, or just in general–you may contact her at: KaitlynDavisBooks@gmail.com

Sign up for Kaitlyn’s newsletter to stay up-to-date with all of her new releases, to receive exclusive subscriber bonus content, and more!