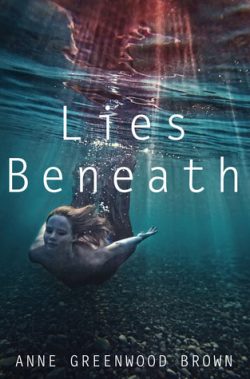 Calder White lives in the cold, clear waters of Lake Superior, the only brother in a family of murderous mermaids. To survive, Calder and his sisters prey on humans and absorb their positive energy. Usually, they select their victims at random, but this time around, the underwater clan chooses its target for a reason: revenge. They want to kill Jason Hancock, the man they blame for their mother's death.

It's going to take a concerted effort to lure the aquaphobic Hancock onto the water. Calder's job is to gain Hancock's trust by getting close to his family. Relying on his irresistible good looks and charm, Calder sets out to seduce Hancock's daughter Lily. Easy enough, but Calder screws everything up by falling in love--just as Lily starts to suspect there's more to the monster-in-the-lake legends than she ever imagined, and just as the mermaids threaten to take matters into their own hands, forcing Calder to choose between them and the girl he loves.

One thing's for sure: whatever Calder decides, the outcome won't be pretty.

I’d been really worried about Lies Beneath, as a lot of the reviews have been mixed, but I really, really enjoyed this book. I loved so much about it. As always, my main points are bolded. :)

1. We have a male narrator! YES! This was so refreshing. Calder is a merman from a family of human-killing mermaids. He was not born this way, but was changed to a merman after falling off a boat and drowning as a young child. Maybe that’s why he’s a bit reformed, and hopes to escape the “school of fish” loyalty and just be his own person. I loved reading his thoughts as he struggled between being who he wanted to be and being who he was created to be. I think Brown did an amazing job writing a male’s thoughts. I’ve always thought that would be a tricky thing to do.

2. This story takes place in an awesome location: Lake Superior. That lake is so mysterious and deep and freezing, and I LOVE that the story took place here rather than in the cliche tropical location. Rather than hearing about rainbow fish and sea turtles, you get to read about sunken ships and the unexplored depths of the lake. We even get a mention of an ancient road down there.

3. I really liked the evil mermaid spin. I was getting tired of the “I wish I were human, but I have this tail, so I’m going to swim around and hope I can fake being human well enough to make you love me” storyline. These mermaids love being who they are. Even Calder does not want to quit being a merman, he just does not want to suck the life out of humans. They all have their own personalities, and don’t sit around suppressing what they are. And the evil thing? It was awesome! Mermaids are made out to be monsters and not humans. It created some suspense and intrigue. I dunno, I guess I’ve always been a bit rebellious myself, so I enjoyed the more gritty and dangerous spin.

4. I really enjoyed the need for revenge that the mermaids had. It consumed their thoughts as they tried to seek revenge on the man they blamed their mother’s death on. Even though these mermaids are considered evil, you have to give them credit for never breaking a promise, and for being extremely loyal to each other. I mean, even though Calder began to change his mind regarding this revenge, his mind was so linked with his sisters’ that he really struggled with an inner turmoil that pulled him in two very different directions.

5. I appreciated Lily’s common sense and vivaciousness. I can’t stand a dumb, quivering-in-her-boots kind of heroine. Lily has a sharp mind and she knows things without having someone beat it into her head with a hammer. And I loved her little sister, Sophie. She is adorable.

6. The Hancock family’s past is vast and dynamic. I loved getting more insight into what happened to make these mermaids so mad, and what mysteries are hidden beneath the surface.

7. The romance was sweet. It was not obsessive or silly. It seemed legit to me. Calder and Lily look out for one another, and have a healthy give and take relationship. Calder is not controlling or stalkery. I mean yes, he lurks in the water outside her home to protect her, but he’s not sneaking in her room to watch her sleep. Lily is not helpless and naive. She can hold her own, and does not frighten easily. I believed this one.

8. I wish the book had spent a little more time on Calder’s sisters. Those girls were so much fun to read about, and they were really what made the book so unique. Hopefully the rest of the trilogy will give us more information on them. They could have their own spin-off series.

All in all, this book is now one of my new favorite mermaid romances. I loved the unique spin, the believable romance, and the interesting characters. I would definitely recommend this for lovers of mermaid books, and it’s also a great one to start on if you’re just dipping your toe into the genre.

Being Sloane Jacobs by Lauren Morrill |

Meant to Be by Lauren Morrill (Book Revi

Flirting in Italian by Lauren Henderson The Trouble with Destiny by Lauren Morri

9 responses to “Lies Beneath by Anne Greenwood Brown | Book Review”