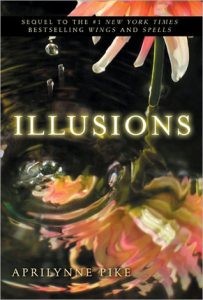 "I don't do patrols, I don't go hunting, I just stick close to you. You live your life. I'll keep you safe," Tamani said, sweeping a lock of hair from her face. "Or die trying."

Laurel hasn't seen Tamani since she begged him to let her go last year. Though her heart still aches, Laurel is confident that David was the right choice.

But just as life is returning to normal, Laurel discovers that a hidden enemy lies in wait. Once again, Laurel must turn to Tamani to protect and guide her, for the danger that now threatens Avalon is one that no faerie thought would ever be possible. And for the first time, Laurel cannot be sure that her side will prevail.

Illusions is  my favorite of the Wings series so far. It was magical, romantic, adventurous, and I got through it in 24 hours!

For the most part, I really like the characters. There’s Laurel, her boyfriend David, her sentry/guardian Tamani, her best friend Chelsea, and Chelsea’s boyfriend Ryan. There’s also a troll-hunter, Klea who I don’t like, and Klea’s foster child from Japan, Yuki. They are all different, they have personality, and they are all people I could see myself being friends with. These people are not annoying, whiny little teenagers. I forget they are in high school. Thank you, Aprilynne.  It’s so nice to read a book where the high schoolers don’t act like stereotypical high schoolers.

So, these characters are off attending high school, keeping the secrets of Faerie a secret, going to school dances heavily guarded by more sentries, protecting themselves and their human families, and avoiding the trolls that are out to discover the secret gates to Avalon, home of the faeries. Laurel spends most of her free time with David, Tamani, and/or practicing her faerie skills in her bedroom. This brings in a whole new cast of characters: the other faeries who live in Avalon and train Laurel on being a faerie during her summer breaks. She has one friend there, Katya, who I really like. She’s adorable. I also like Laurel’s teachers and mentors. The descriptions of Avalon are amazing. It sounds gorgeous, from the scenery, to the description of an out-of-this-world new year’s festival, to the architecture, even the clothing and accessories the faeries wear. I would LOVE to go to Avalon!

And then we have the characters in between: the sentries, faeries who keep a watchful eye on everyone else,  and Laurel’s parents, who are extremely understanding. SO many characters to keep track of, but it doesn’t seem like it while you’re reading. It just sounds like a lot when I type them all out in a list like this.

Obviously there’s a love triangle, just like there is in any other YA romance. I like both the guys, David and Tamani, involved in this love triangle! I find myself rooting for one, and then the other. Usually I have one favorite and I root for him throughout the entire book/series. I’m confused on who Laurel should end up with, though. I can only imagine how confused SHE is, since she’s the one actually living it. She has a very sweet bond with both the boys. In this book, though, she takes the time to focus on the guy who she’s spent most of her time brushing off, and it was adorable! This guy loves her so much, and he is so willing to wait for her to decide. I swear, I wish I had one of these guys going after me. Laurel gets both. It’s not fair. Or maybe it is. I think I’d really get stressed out loving two different men.

There’s tense moments, romantic moments, tender moments, beautiful writing, amazing settings, fun characters, and magic, magic, magic! The end had a twist I wasn’t expecting, and dropped to quite a cliffhanger! I really feel like giving away any more details would spoil everything, so I need to just stop and let you read them for yourself! I hate writing such a vague review, but it must be done! If you have read these, I’d love to hear what you thought! If you haven’t read them, hopefully my review pushed you towards giving them a try. I hope I didn’t spoil anything for anyone, and at the same time I hope I did the book justice.