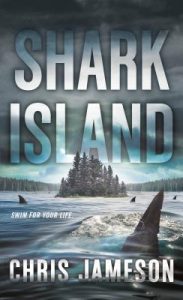 A shark attack survivor believes she has already lived through her worst nightmare. She's dead wrong. . .

Naomi Cardiff is not one to give up without a fight and now, after learning about a series of shark attacks in Cape Cod, she s joined a team of scientists to put a stop to the terror. The plan: to lure the sharks to a remote island far from the populated coastline. Meanwhile, a fierce Nor Easter is underway. . .

In the midst of the storm, an alarming number of Great Whites have come to slaughter the seals in a vicious feeding frenzy. When sharks ram and breach the hull, Naomi and her team must jump ship and swim desperately through a sea of circling fins and gaping jaws to the tiny island. But as the swells from the storm begin to swallow their rocky refuge, how will they manage to make it out alive?

I don’t know what it is about shark stories, but I gobble them up. I love the movies Jaws and The Shallows, and I love Shark Week… Sharks are just my thing. Unfortunately, it takes a lot to not make a shark story come off as outlandish and stupid. And this is how Shark Island turned out for me. I allow a LOT with books like these, but I just could not with this one.

The entire store was very unbelievable. The entire premise was to lure the sharks away from Cape Cod by broadcasting a signal that turned the seals into robots who could no longer think and act on their own, regardless of the danger they were in. This signal also turned the sharks into vicious killing machines with a revenge complex. It just seems far too outlandish. I was bored for the first half until the characters actually become stranded, and then I spent the second half rolling my eyes. I didn’t like any of the characters, and found their backstories very boring and drawn out. There was an INSANE amount of profanity and gory, bloody shark attacks. Sharks were flying out of the water and snapping bodies in half with one bite, sending all kinds of carnage and refuse into the water. There was so much blood that people were feeling the water temperature rise. It was just too much gore, too much profanity, too unbelievable, and too over the top dramatic and theatrical for me. I’m willing to suspend disbelief, but this was gratuitously silly and I’m irritated I made myself finish it. lol