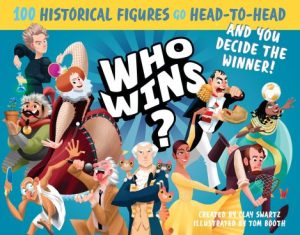 Who would rock the mic at karaoke night? Abraham “The Great Emancipator” Lincoln or Jane “Lady Persuasion” Austen? How about a hot dog eating contest between Harry “Mr. Magic” Houdini and Mary “Mother of Frankenstein” Shelley? What about a pie contest? A staring contest? And who has a better chance of sneaking into Area 51, Isaac “Gravity Guy” Newton or Sacagawea aka “The Pathfinder”?

In Who Wins?: History, you decide the winner in over 50 head-to-head challenges between 100 of history’s most illustrious characters. But choosing the victor isn’t arbitrary. Readers must justify their answers using each of the historical figures’ six 0-10 category rankings in bravery, leadership, artistry, wealth, wisdom, and fitness; as well as facts from short biographies.

As funny as it is informative, the book is uniquely formatted so readers can match up each and every character in any of the head-to-head battles. History has never been so much fun!

This interactive, educational book is seriously so much fun! And it’s so unique! I’ve never seen anything quite like this before. I thought that posting a picture of one of the inside spreads would be the easiest way to review this book, so look:

Ok, so here we have Napoleon and Thomas Jefferson. Above their pictures is all the information you need to know about each of them, including the years they were alive, their lives growing up, the parts they played in history, and some little known facts. Basically, everything you need to know to make an informed decision as to which of them would be more successful at stopping a runaway train. The middle flap at the top prompts you with some things to consider during your decision-making process. Their skills are rated on a scale of 1-10. After getting to know them well, you make your decision. There’s no right or wrong answer. If you’re alone, you win! If you have friends, family, or classmates with you then the debate begins. Perhaps one of the other players will convince you to change your mind or you might just stand your ground. Then you move on to the next round. You can continue the face-off between these two guys and flip up the middle flap to give them a new battle (like sneaking into Area 51 or winning the talent show) or you can flip up the people flaps and pick new opponents.

How fun is this? I can see this being taken on road trips, played in social studies or history classes (divide the class in two, put the book up on the projector, and have the teams discuss before sending representatives to the front to argue their case), or added to the family game night rotation. The images are bright, colorful, and fun to look at. The book is well-constructed and easy to flip through. The information provided is written in an easy to read and understand way, so it’s great for kids and adults of all ages. I seriously do not have one complaint in the world about this book, and just love it to pieces. Run out and grab yourself a copy right now!