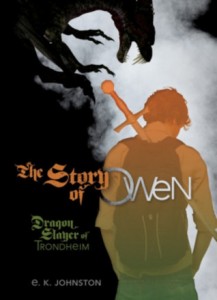 Listen! For I sing of Owen Thorskard: valiant of heart, hopeless at algebra, last in a long line of legendary dragon slayers. Though he had few years and was not built for football, he stood between the town of Trondheim and creatures that threatened its survival. There have always been dragons. As far back as history is told, men and women have fought them, loyally defending their villages. Dragon slaying was a proud tradition. But dragons and humans have one thing in common: an insatiable appetite for fossil fuels. From the moment Henry Ford hired his first dragon slayer, no small town was safe. Dragon slayers flocked to cities, leaving more remote areas unprotected. Such was Trondheim's fate until Owen Thorskard arrived. At sixteen, with dragons advancing and his grades plummeting, Owen faced impossible odds armed only with a sword, his legacy, and the classmate who agreed to be his bard. Listen! I am Siobhan McQuaid. I alone know the story of Owen, the story that changes everything. Listen!

This book was a required read for my Young Adult Literature class as part of my MLIS program.

So… I’m not going to write a formal review of The Story of Owen. I’m just going to post my thoughts that I wrote for a couple assignments in my class. Unfortunately, this book was not my favorite. Its had its moments, but overall I had some complaints I could not reconcile.

1. It started out very slowly for me, and never really picked up very much. Maybe things were a bit slow going because the author took her time to build the world. She spent a lot of time going through historical elements to establish dragons as a part of life, and we also read flashbacks to get to know Siobhan and Owen better. I like worldbuilding a lot, but I felt bogged down by so many details and information dumps.

2. I can imagine the author had to do a lot of research to figure out ways to add dragons to history. And I did find some of these historical facts interesting and even cool, but there was just too much.

3. One interesting thing I am slightly confused by is Owen’s need for a bard. It almost seems as
though the author is trying to make Owen’s story a tall tale of sorts, that people talk about for generations… like John Henry. It’s definitely a unique plot mechanism, but I’m not sure I like it.

4. I do love Owen’s and Siobhan’s friendship. They have this mutual caring and admiration for one another that I think is sweet. There are some very tender moments throughout.

5. There’s a very strong “girl power” message throughout the story. The story is dominated by powerful, strong ladies. I think it’s refreshing, and I wonder if the author had a reason for doing this. I think this would be a great book to recommend to girls who are looking for strong heroines.

6. There’s suggestions of possible romance throughout the book, but it never develops into the full-blown romance/infatuation that is so typical in books for young adults. I’m not complaining. I find it refreshing that the author has chosen to hook readers with strong friendships instead.

7. Siobhan’s and Owen’s personalities might be the reason for this lack of romance. To me, they both act younger than the book says they are. I was very surprised when Siobhan drove the two of them or offered to pick Owen up for something, but then remembered she’s old enough. It could just be that these two are a little behind socially and friendship feels more natural than romance.

8. The ending was definitely my favorite part of the story. I can’t even really say why, I was just very happy with how everyone ended up.

9. I can see The Story of Owen having a wide appeal because it is not gender specific and it has lots of different story elements (homosexuality, adventure, bravery, friendship, tradition, history/alternate history, perseverance, familial relationships, etc.).

All in all, I’m a romance girl! I think the lack of romance, which would not have worked in this story anyway so I’m glad the author did not add it, combined with the huge info dumps that ripped me out of the story are my biggest complaints. But I also did not really connect with the characters. I never felt anything for any of them. So really, things were just a mess for me.