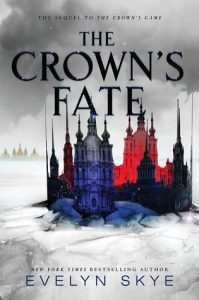 Russia is on the brink of great change. Pasha’s coronation approaches, and Vika is now the Imperial Enchanter, but the role she once coveted may be more difficult—and dangerous—than she ever expected.

Pasha is grappling with his own problems—his legitimacy is in doubt, the girl he loves loathes him, and he believes his best friend is dead. When a challenger to the throne emerges—and with the magic in Russia growing rapidly—Pasha must do whatever it takes to keep his position and protect his kingdom.

For Nikolai, the ending of the Crown’s Game stung deeply. Although he just managed to escape death, Nikolai remains alone, a shadow hidden in a not-quite-real world of his own creation. But when he’s given a second chance at life—tied to a dark price—Nikolai must decide just how far he’s willing to go to return to the world.

With revolution on the rise, dangerous new magic rearing up, and a tsardom up for the taking, Vika, Nikolai, and Pasha must fight—or face the destruction of not only their world but also themselves.

Here I sit, broken-hearted after taking a month to read this book. Guys, I loved The Crown’s Game. LOVED it. I was so excited for this sequel and ended up having to talk myself out of DNFing an infinite number of times because I so wanted to get back there to that place of love for this world and these characters. Sadly, it didn’t happen and I’m left so disappointed that I don’t even have much to say.

I felt like I was in a different world with this book. It was dark, depressing, and to be honest… boring. I found myself skimming at multiple points due to a complete lack of interest. The Crown’s Game was magical and whimsical and light and full of color and excitement. All of these things that I loved so much were gone in The Crown’s Fate. Nikolai’s character was unrecognizable in a bad way. He went in a very heartbreaking direction that I did not get over even after all loose ends were quickly tied up into a convenient little bow at the end (seriously, that ending was a huge disappointment after everything we’ve been through). Pasha and Vika both seemed weaker than they used to, and never really did or said anything important. There was very little going on in the story, and I felt like what did happen just continued to repeat itself because there was nothing else to say. What little magic there was was just not good for me. And I did not like seeing the characters I once loved being evil and plotting against each other. The book was too long for the story, and I ended up just going through the motions by the end. Let me just say: some horrible stuff happens that any normal person would not be ok with as quickly as these characters were ok with it.

So yeah, that’s all I have to say. The only thing good I can take away from this is that there were a few glimmers of the world I loved. Evelyn’s writing is also still lovely, but I was just not happy with where the story went. I’m so SO sad, as I was highly anticipating this sequel. I will forever recommend The Crown’s Game, but will that suggest people treat it as a standalone. 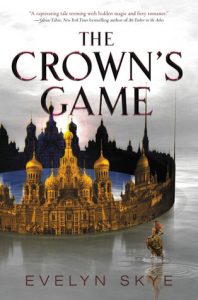 Vika Andreyeva can summon the snow and turn ash into gold. Nikolai Karimov can see through walls and conjure bridges out of thin air. They are enchanters—the only two in Russia—and with the Ottoman Empire and the Kazakhs threatening, the Tsar needs a powerful enchanter by his side.

And so he initiates the Crown’s Game, an ancient duel of magical skill—the greatest test an enchanter will ever know. The victor becomes the Imperial Enchanter and the Tsar’s most respected adviser. The defeated is sentenced to death.

Raised on tiny Ovchinin Island her whole life, Vika is eager for the chance to show off her talent in the grand capital of Saint Petersburg. But can she kill another enchanter—even when his magic calls to her like nothing else ever has?

For Nikolai, an orphan, the Crown’s Game is the chance of a lifetime. But his deadly opponent is a force to be reckoned with—beautiful, whip smart, imaginative—and he can’t stop thinking about her.

And when Pasha, Nikolai’s best friend and heir to the throne, also starts to fall for the mysterious enchantress, Nikolai must defeat the girl they both love... or be killed himself.

As long-buried secrets emerge, threatening the future of the empire, it becomes dangerously clear... the Crown’s Game is not one to lose.

I pretty much knew I was going to love this book when I read the synopsis and discovered that it takes place in Russia during the time of the Ottoman Empire. Combine that with two enchanters, magic, an ancient game, opulent St. Petersburg, and a forbidden love story and I was sold. I’m happy to say that The Crown’s Game was everything I had hoped for and so much more! As always, my main points are bolded. :)

1. Skye does a wonderful job of blending history with fantasy in a way that had me convinced that this magic and the game is real, and that these enchanters really existed all those years ago. The people and the culture and the setting… it’s all very Russian. The magic just makes it all sparkle.

2. The idea of the actual Crown’s Game is brilliant, and the world-building that goes along with it is so well done. When two enchanters are born in one generation, they must battle each other in a set of magical tasks to see which one is fit to become the Tasr’s on and only enchanter. The other one dies. In this story we have Vika, a mysterious girl from a small town, and Nikolai, the best friend to the son of the Tsar (Pasha). Pasha’s birthday is coming up, so the Tsar instructs these two enchanters to engage in a magical battle to make Pasha’s birthday something special. The battle begins, and the beauty and opulence that encompasses St. Petersburg as a result of this magic is amazing. I won’t give too much away, but I absolutely must mention the intricate system of fountains and color-changing lights that fill the city’s canal system. That entire scene was beautiful, and is still my favorite in the entire book.

3. The characters are great, but I was so swept up in the magic that I never ended up caring about any of them. I know this will change in book #2, though. I know, it’s so weird that I’m allowing this. I’ve always had this rule that I must connect with at least one character in order to even finish a book. So why did I continue even though that didn’t happen this time? And why did I give it a 5-star rating? Guys, it’s like I was hypnotized. I was so captivated, so intrigued, so mesmerized, that I didn’t even notice I wasn’t connecting until I sat down to write my review.

4. I owe my feelings about this book to Evelyn’s writing. She has such a way with words, and wrote such beautiful scenes. There’s one scene that takes place on a little island that one of the enchanters created for one of their tasks. The other enchanter followed along behind and created magical benches that, when you sit on them, transport you to an exotic location where you get to hear and smell and see everything. It was a beautiful, scene, and so wonderfully written and described. I just loved it.

5. The romance is pretty non-existent in this book. There are hints of it and some somewhat unrequited love (?) going on, but it just wasn’t developed into much of anything. Again, that might change in book #2. I was ok with this because everything is so mysterious in this book that you never really know for sure what’s going to happen anyway.

6. The book moves really slowly, but that was fine with me. I did have some trouble getting into it in the beginning, but then I was hooked and I got swept away. If you find that it’s not grabbing you like you hoped, just hang in there and keep going. Let it get its hooks into you.

7. The ending pretty much slaughtered my feels. Like, what do I even do while I wait for the second book?

Overall, this was a very beautiful, magical, mysterious, and captivating tale. I loved the setting and the magic, but I loved the way in which it was written and pieced together the most. I can’t wait to see what happens next, especially after that ending!