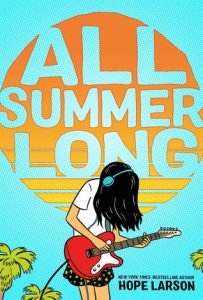 A coming-of-age middle-grade graphic novel about summer and friendships, written and illustrated by the Eisner Award–winning and New York Times–bestselling Hope Larson.

Thirteen-year-old Bina has a long summer ahead of her. She and her best friend, Austin, usually do everything together, but he's off to soccer camp for a month, and he's been acting kind of weird lately anyway. So it's up to Bina to see how much fun she can have on her own. At first it's a lot of guitar playing, boredom, and bad TV, but things look up when she finds an unlikely companion in Austin's older sister, who enjoys music just as much as Bina. But then Austin comes home from camp, and he's acting even weirder than when he left. How Bina and Austin rise above their growing pains and reestablish their friendship and respect for their differences makes for a touching and funny coming-of-age story.

I’ve started developing interest in graphic novels over the last few years, which was a major surprise to me because I’ve always overlooked them. More and more have been trickling in from various publishers, and I’m really seeing the graphic novel format take off, especially for younger readers. I thought All Summer Long sounded like a fun, light read and was excited to dig in. Sadly, there just wasn’t enough substance for me and it felt much younger than I would have liked.

I enjoy coming-of-age stories, but I don’t feel like All Summer Long was a good example of one. I suppose the characters go through some changes, but they felt more like normal kid changes than coming-of-age. When a story is described as a “coming-of-age story”, you expect some major growth. Bina is 13, and she’s spending her summer alone while her best friend, Austin, is at summer camp. She spends the summer playing/listening to music, and hanging out with Austin’s older sister. She gets to babysit and go to a concert and deal with all the normal kid drama: fights, heightened emotions, and overreactions. At the end, she seemed to be pretty much the same person she was in the beginning. The story was very, very simple and the characters seemed like cardboard cutouts. There just wasn’t anything grabbing me and sucking me in.

I know I’m the wrong demographic, but I work with kids who are about this age. Actually, my kids are about a year younger and they don’t talk like these characters. They don’t use the word “bae” or say “like” every other word. I feel like the author tried to write for tweens and young teens, but without a real understanding of what those kids are like today. These kids seemed younger than mine until they said “bae”, which people my age (late 20’s, early 30’s) were already saying when these kids were toddlers. It just felt really unrealistic to me.

The illustrations were fun, but too stylized for me. The proportions were off and there were inconsistencies in the looks of the characters from page to page. Sometimes I had a hard time telling some of the secondary characters apart. It was easy to read and the boxes flowed in a nice way. I rarely read sections out of order because I didn’t know which box came first, which has happened to me in other graphic novels I’ve read.

All in all, this one just didn’t work for me. I shut the book and immediately wrote my review because I’m not even sure I’ll be able to remember it. I would choose to recommend other graphic novels over this one.