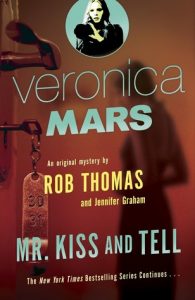 The Neptune Grand has always been the seaside town’s ritziest hotel, despite the shady dealings and high-profile scandals that seem to follow its elite guests. When a woman claims that she was brutally assaulted in one of its rooms and left for dead by a staff member, the owners know that they have a potential powder keg on their hands. They turn to Veronica to disprove—or prove—the woman's story.

The case is a complicated mix of hard facts, mysterious occurrences, and uncooperative witnesses. The hotel refuses to turn over its reservation list and the victim won’t divulge who she was meeting that night. Add in the facts that the attack happened months ago, the victim’s memory is fuzzy, and there are holes in the hotel’s surveillance system, and Veronica has a convoluted mess on her hands. As she works to fill in the missing pieces, it becomes clear that someone is lying—but who? And why?

In my raving review of The Thousand-Dollar Tan Line I explained how much I love Veronica Mars. And I’m going to pretty much ditto everything I said there in this review (so maybe go read that review as well?). Mr. Kiss and Tell is another great Veronica Mars mystery novel, although I did not love the mystery as much as I did the first one (although it’s very close to Veronica’s heart because of her own past). But that’s ok because Veronica and Logan!!! He wasn’t really around in the first book, save for some Skype calls (he’s in the military), but he’s here now and he brought all of wit and banter with him! This is what we marshmallows have been waiting for.

I don’t have much else to say because I don’t want to take away from anyone’s reading experience. I TOTALLY recommend this book and the first to fans of Veronica Mars. 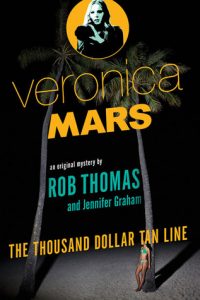 Ten years after graduating from high school in Neptune, California, Veronica Mars is back in the land of sun, sand, crime, and corruption. She's traded in her law degree for her old private investigating license, struggling to keep Mars Investigations afloat on the scant cash earned by catching cheating spouses until she can score her first big case.

Now it's spring break, and college students descend on Neptune, transforming the beaches and boardwalks into a frenzied, week-long rave. When a girl disappears from a party, Veronica is called in to investigate. But this is not a simple missing person's case. The house the girl vanished from belongs to a man with serious criminal ties, and soon Veronica is plunged into a dangerous underworld of drugs and organized crime. And when a major break in the investigation has a shocking connection to Veronica's past, the case hits closer to home than she ever imagined.

I absolutely love Veronica Mars. I discovered the TV show a few years ago when my friend, Jess, sent me the complete DVD set as a gift after finding out I’d never seen it. And a huge fan was born! Even though I knew the TV series would end, I was still soooo sad when it did. Then I discovered that the writers of the show also wrote two books and I was elated. I was not disappointed. As always, my main points are bolded. :)

1. This book is definitely a gift to Veronica Mars fans. I’m sure you’d enjoy reading it if you’ve never seen the show, but I can’t imagine why you’d want to. This book takes place years after the series and the movie, so it really goes without saying that you’ll be happier and love it more if you watch all of those first.

2. The Thousand-Dollar Tan Line reads like an episode of the show, and I LOVED that about it. Veronica’s inner monologues are still golden. Her snark is perfection. I was all smiles.

4. The mystery is actually really amazing. I was invested not just because I love the characters and the world, but because I was legitimately curious about how the mystery of the missing girl would be solved. It was exciting and filled with twists and turns.

5. The writing was awesome. There’s a lot of books out there that serve as sequels of or extensions to TV shows or movies, and I can’t imagine that any of them were as well done or pleasant to read. Nothing was missing for me. I wasn’t wishing I was watching it instead of reading it. I just loved it, and that seems crazy to me!

Overall, if you loved the show you will love this book and then re-watch the TV series as soon as you’ve finished it. I loved being back in Neptune with the gang, tagging along on one of their cases again.