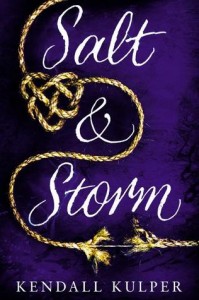 A sweeping historical romance about a witch who foresees her own murder--and the one boy who can help change her future.

Sixteen-year-old Avery Roe wants only to take her rightful place as the witch of Prince Island, making the charms that keep the island's whalers safe at sea, but her mother has forced her into a magic-free world of proper manners and respectability. When Avery dreams she's to be murdered, she knows time is running out to unlock her magic and save herself.

Avery finds an unexpected ally in a tattooed harpoon boy named Tane--a sailor with magic of his own, who moves Avery in ways she never expected. Becoming a witch might stop her murder and save her island from ruin, but Avery discovers her magic requires a sacrifice she never prepared for.

I’m SO sad, you guys. So sad. I was so intrigued by the idea of whales and witches and magic and an eerie little stormy village on an island. But honestly, Salt & Storm is the biggest disappointment of the year for me. I’ve been battling with even writing a review, but I decided to go ahead. My thoughts are very unorganized, so this is just going to be a list of things.

1. There is hardly any magic at all.
2. The writing style just did not work for me.
3. I felt like the characters spoke in a really weird way.
4. I was really upset by a dream Avery has, which includes a gruesome scene about a whale being killed by humans. It was disturbing. My review policy states that if I encounter a scene like this I’m done, but my curiosity got the best of me. Stupid curiosity.
5. I’m not sure what the point was of even including witches in this story, because there was so little having to do with them. In theory, witches are really important to the island because they bring the whales in to be killed or lead the whalers to the whales, whatever (yes, another disturbing thing to read about), but nobody was doing anything really witchy.
6. I hate Avery’s mother for taking away her freedom to choose to be a witch. This mom went as far as to almost kill Avery’s best friend in order to keep her from fulfilling her destiny.
7. Death. So much death. And I guess it was not a large quantity of death, but the fact that most of the deaths were disturbing or upsetting.
8. The characters were extremely boring. I honestly did not care, even when I could tell the author wanted me to.
9. The romance is not even worth mentioning. I hated it. I can tell the author tried to not have it be insta-lovey, but it was. And I did not like the guy at all. I can’t even remember his name.
10. There were a few twists that kept me going, but I skimmed so many passages just looking for the major details. I was bored. This book is SO SLOW.
11. In order to not spoil anything, I’m not going to discuss the ending. But I hated everything about it. Death, heartbreak, and other events that make you go, “Ok, wait what? What has been the point of this book anyway?” happened.
12. I was left feeling so unbelievably depressed. I had to go and talk to my mom and basically confess what I just read, because I just could not shake that awful dark cloud that this book installed over my head.
13. I wish I had DNFed.

*sigh* Well, there you have it. My brain dump. And honestly, I was over this book until I listed out how upset with it I am. Just thinking about it has me in a funk all over again. I can’t honestly say I would recommend this to anyone.