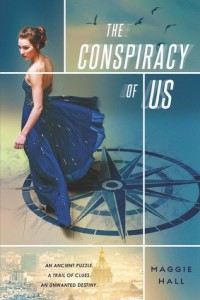 To fight her destiny as the missing heir to a powerful and dangerous secret society, sixteen-year-old Avery West must solve an ancient puzzle in a deadly race across Europe. Forbidden love and code-breaking, masked balls and explosions, destiny and dark secrets collide in this romantic thriller, in the vein of a YA DaVinci Code.

They are part of a powerful and dangerous secret society called the Circle of Twelve, and Avery is their missing heir. If they discover who she is, some of them will want to use her as a pawn. Some will want her dead.

To thwart their plans, Avery must follow a trail of clues from the landmarks of Paris to the back alleys of Istanbul and through a web of ancient legends and lies. And unless she can stay one step ahead of beautiful, volatile Stellan, who knows she’s more than she seems, and can decide whether to trust mysterious, magnetic Jack, she may be doomed after all.

I’ve always had this weird interest in conspiracy theories. Now, I’m not some paranoid theorist, but I find these theories very entertaining to read about. So naturally, The Conspiracy of Us had me very intrigued from the get go. And when I read that is was being compared to The Da Vinci Code, I was even more excited! I ended up LOVING this book, and am so excited to read more from debut author, Maggie Hall! As always, my main points are bolded. :)

1. I learned very quickly that I would need to suspend a little disbelief in order to immerse myself in the story. Avery is 16 years old, so I found it to be a little unbelievable that she was so valuable and in so much danger, with so many people out to kill her. We’re not given a ton of details in the beginning, so just roll with it and Maggie Hall will convince you. The story ended up being pretty fantastic, and I believed all of it.

2. The world in this story is amazingly secretive and interesting. The Conspiracy of Us is contemporary, but with this underlying mystery that is believable and unbelievable at the same time. Basically, The Circle of Twelve is a group of twelve families who rule the world. They have family members in every government system, in every country, and in pretty much every facet of life. You think you know why WWI happened, but you’re wrong. It was because of dueling families. And these families go all the way back to Alexander the Great and Napoleon. I loved learning about all these secrets and mysteries of the world. Everything fits together in a really complicated puzzle that was so much fun to try and put together.

3. The Conspiracy of Us is FILLED with action and excitement. I flew through this book because there was never a good stopping point! Crazy things happen back to back to back, and I barely had time to catch my breath.

4. I loved the travel aspect. We bounce around Paris and Istanbul, and I loved it! Things happen in Notre Dame and at the Hagia Sophia. I’ve been to Paris, so I loved revisiting, and now I want to go to Istanbul super bad.

5. The romance is pretty perfect. Jack is so swoony and perfect. Plus, he has a British accent. I mean, really. There is the one chapter that just had me melting. It was the sexiest, most tender, most romantic moment that I’ve ever read in young adult fiction.

6. Maggie’s writing is beautiful, and I just know she is going to become a strong facet of the young adult community. I was truly intoxicated by some of her passages, not to mention her vivid imagination.

7. I loved the characters, but Jack has stolen my heart. Holy swoonfest.

8. The Conspiracy of Us is fun and light, but also has some serious elements. The characters are flawed, and we get to learn about those flaws. I tend to love and connect with characters for their flaws because it makes them more real.

All in all, The Conspiracy of Us was my perfect book. I love the secrets, the mystery, the puzzle, the romance, the travel, the characters, the writing. I really can’t come up with a complaint, except that it’s not a standalone and I’m DYING for the next book! I recommend this to all fans of YA. There’s a little something for everyone. I’m so excited for Maggie, and hope she plans to stick around the YA scene for a long time.