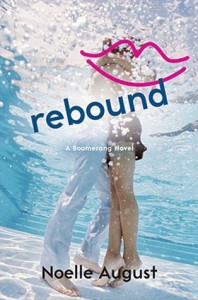 Hooking up is only the beginning of the fun in this sexy and irresistible second installment of the thrilling New Adult series, Boomerang.

Adam Blackwood has it all. At twenty-two, he’s fabulously wealthy, Ryan Gosling-hot and at the top of the heap in the business world. His life is perfect, until a scandal from his past resurfaces and knocks the tech wunderkind down, throwing his company, Boomerang, a hook-up site for millennials, into chaos.

Three years ago, Adam married his high school love—and then lost her in a tragic accident. Now, the heartbreak and guilt he’s tried to bury with work and women begins to take over his life.

Alison Quick, the twenty-one-year-old daughter of a business tycoon—and the very ex-girlfriend of Boomerang’s former intern, Ethan—has a problem of her own. She’s got one chance to prove to her father that she deserves a place in his empire by grabbing control of Boomerang and taking Adam down.

But as Alison moves in on him, armed with a cadre of lawyers and accountants, she discovers there’s much more to Adam and Boomerang than meets the eye. Will earning her father’s approval come at the price of losing her first real love? It appears so, unless Adam can forgive her for wrecking his life and trying to steal his livelihood. But Alison hopes that old adage is right. Maybe love can conquer all.

I love Boomerang so much (see my review), and so I was very excited when I was approached to be a part of the blog tour for Rebound, the second book in the series. I’m pretty leery of new adult books because they tend to be all angsty, dramatic, and full of bad decisions and one-night stands. I absolutely love this series, though, so if you’re like me and avoid new adult as often as possible, give this series a shot! As always, my main points are bolded. :)

1. I know everyone knows this already, but Noelle August is a pen name for an author duo including VERONICA ROSSI. I love her! And I am seriously so happy that she was the one who made me decide to read these books and give new adult a chance.

2. Rebound is FUN. It’s all about being sexy and exciting without the focus falling on sex and lust. There’s a pretty adorable scuba diving scene that had me swooning. Rebound is steam, tension, humor, and serious issues. These people are real and flawed, which is what I want in my characters!

3. Adam. Blackwood. BOY does he have a story. He’s the creator of Boomerang, and I loved learning more about him and his secrets. He’s got a hard exterior, not letting anyone in since his ex died. He has his friends, and that’s that. Alison makes him want to change and let someone new in, but it’s hard. However, it’s fun for us! I love watching him trust Alison more and more, connecting with her in ways he’s scared to with anyone else. MAN is he swoony. And sexy. LOVE Adam.

4. Alison is given a chance to redeem herself in this book, as many people are unhappy with her for what she did to Ethan. And she does! I really liked Alison. She’s tender (she saves and rehabilitates horses!), caring, and trying to fit in to her jerky father’s huge shoes. She has her flaws and insecurities as well. She’s made mistakes and she owns them.

5. I loved seeing the rest of the gang at Boomerang again! Mia makes an unfortunate return to us, but I still adore her. I was even happy to see Cookie again, and I’m not her biggest fan. It was like catching up with old friends.

6. The story is told in alternating viewpoints, going back and forth between Alison and Adam. I love it when an author (or in this case, authors) does this, but is has to be done right or things feel redundant. This was done RIGHT, and added so much to the dynamism of the story.

All in all, I loved Rebound. I’m not sure I loved it as much as I did Boomerang because, as we all know, our first loves hit us the hardest. But I loved returning to Boomerang and these characters, I loved seeing Adam and Alison figure things out, and I can’t wait for the next book, Bounce, which is all about Adam’s hilarious younger brother.

And be sure to follow the rest of the Rebound blog tour! 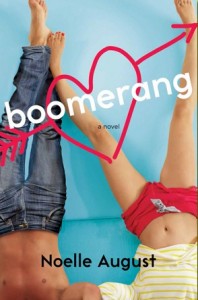 Welcome to Boomerang.com, the dating site for the millennial gen, with no-fuss, no-commitment matchups and where the action on the job is steamier than any random hookup

Mia Galliano is an aspiring filmmaker. Ethan Vance has just played his last game as a collegiate soccer star. They're sharp, hungry for success, and they share a secret.

Last night, Ethan and Mia met at a bar, and, well . . . one thing led to another, which led to them waking up the next morning—together. Things turned awkward in a hurry when they found themselves sharing a post-hookup taxi . . . to the same place: Boomerang headquarters.

What began as a powerful connection between them is treated to a cold shower, courtesy of two major complications. First, Boomerang has a strict policy against coworkers dating. And second, they're now competing for the same job opening in the fall.

As their internships come to an end, will they manage to keep their eyes on the future and their hands off each other, or will the pull of attraction put them right back where they started?

I think Boomerang might just be the first new adult novel that I LOVED. Those of you who read my post on how book blogging is a lot like online dating know and understand my plight in the dating world these days. Naturally, I was drawn to a book that tackled an unconventional method of dating. And I adored every last bit of it! As always, my main points are bolded. :)

1. We all know that Noelle August is a pen name for Veronica Rossi (Under the Never Sky series) and Lorin Oberweger, right? I LOVE VERONICA ROSSI, so as soon as I found out she was teaming up to write such a unique NA novel… I had a feeling I’d love it even though I’m not completely on board with NA. *dodges tomatoes* I have a whole new view on NA now. And you totally can’t tell there were two authors at work here. The voice is seamless.

2. Ok, so I guess I should explain my problem with NA. So many of the back cover summaries I read for NA books make the stories sound SO emotional and heavy and angsty. Someone is suffering a huge loss or a huge physical/mental condition or have dealt with abuse or any other form of sadness. And/or there’s SO much drama. I’m sorry, but I’m just not a fan of books like that. Boomerang is fun! It’s about two normal people in a fun situation. I laughed. Yes, a couple heavier issues pop up, but not so much that heaviness becomes the major plot line. I did not know NA could be this way. It’s nice to see an author view my age group as being about more than drama and poor life decisions.

3. The story is just so sweet! I could totally see Boomerang as a movie starring Amy Adams or Kristen Bell. The characters are so loveable, and I really can’t say enough about them. Mia and Ethan “meet” in the most hilarious way, and the first couple chapters had me giggling a lot. From then on, it’s a sexy, flirty, funny, emotional, and fun ride to the end.

4. I particularly love Ethan, who is just a normal, good guy. Totally swoony.

5. The chemistry between Ethan and Mia is so perfectly complimented by this burning chemistry. And they know it, yet they really don’t want this to be the case. So they try to be friends, which does not work extremely well. It’s adorable to watch, though! Jealousy and competition and frustration ensues. It’s perfection.

6. The story was about so much more than an accidental one night stand turned co-worker/competitor situation. One would think that a story centered around a dating service specifically for clients interested in no-strings-attached hook-ups would be shallow and full of lust. This book has feelings and friendships and relationships. The characters care about one another. I just loved that the plot was so much deeper than I was expecting.

Basically this review is about to get redundant because I want to keep typing, yet I don’t want to tell you anything! I’m scared I’ll spoil the fun for you! So I’m going to quit here and say that this book is one of my absolute favorites of the year so far, and I cannot wait to read the second book! My mind has been changed on NA books, and I have a feeling I will be giving more of them a chance in the future!