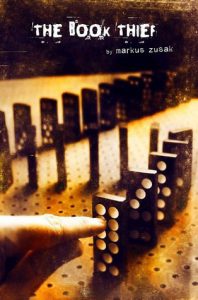 It’s just a small story really, about among other things: a girl, some words, an accordionist, some fanatical Germans, a Jewish fist-fighter, and quite a lot of thievery ...

Set during World War II in Germany, Markus Zusak’s groundbreaking new novel is the story of Liesel Meminger, a foster girl living outside of Munich. Liesel scratches out a meager existence for herself by stealing when she encounters something she can’t resist – books. With the help of her accordion-playing foster father, she learns to read and shares her stolen books with her neighbors during bombing raids as well as with the Jewish man hidden in her basement before he is marched to Dachau. This is an unforgettable story about the ability of books to feed the soul.

I read this book over the course of almost two years in the hopes that I would not get attached and that I would not cry. I was unsuccessful on both accounts. There’s not much to say, really. It’s a beautiful story that is beautifully told.

The Book Thief, narrated by Death himself, tells the story of Liesel who discovers her very first book at her younger brother’s graveside after being put into foster care by a mother who could no longer take care of her. Her foster father teaches her to read, and she discovers her love of books as the Nazis run rampant through her country, reeking havoc on those just like the Jewish man hiding in her basement. She learns about love, life, and loss.

This book is probably the best book I’ve ever read in terms of writing, message, creativity, and thought. The writing style is immaculate in a way I can’t even explain. Emotions and feelings jump off of the page and into your soul. The story is true and heart wrenching, yet I smiled so many times. Death’s voice is unlike anything I’ve ever read before. He is cynical and caring at the same time, and is more grandfather than Grim Reaper. The characters are perfectly flawed and hopeful.

I think the most wonderful thing about this book is that it has teen appeal as well as adult appeal. We get to watch Liesel grow up, and even though she is younger than most readers, her maturity shines through because of her experiences. She could be 10, 17, 25, or 80 and each reader could identify with her and appreciate her voice. The themes of death, the importance of literature, friendship, family, love, and loss are so beautifully conveyed. It’s such a unique take on the Holocaust, and one that really spoke to me. I can see The Book Thief becoming a classic that is read for generations and generations because it is timeless and beautiful. Even though it is a very heart-wrenching and difficult book to read, I would recommend it to any and every reader. It’s so important that this event in history never be forgotten.