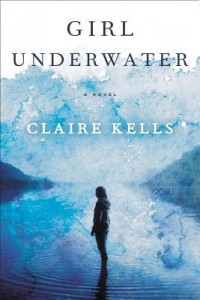 An adventurous debut novel that cross cuts between a competitive college swimmer’s harrowing days in the Rocky Mountains after a major airline disaster and her recovery supported by the two men who love her—only one of whom knows what really happened in the wilderness.

Nineteen-year-old Avery Delacorte loves the water. Growing up in Brookline, Massachusetts, she took swim lessons at her community pool and captained the local team; in high school, she raced across bays and sprawling North American lakes. Now a sophomore on her university’s nationally ranked team, she struggles under the weight of new expectations but life is otherwise pretty good. Perfect, really.

That all changes when Avery’s red-eye home for Thanksgiving makes a ditch landing in a mountain lake in the Colorado Rockies. She is one of only five survivors, which includes three little boys and Colin Shea, who happens to be her teammate. Colin is also the only person in Avery’s college life who challenged her to swim her own events, to be her own person—something she refused to do. Instead she’s avoided him since the first day of freshman year. But now, faced with sub-zero temperatures, minimal supplies, and the dangers of a forbidding nowhere, Avery and Colin must rely on each other in ways they never could’ve imagined.

In the wilderness, the concept of survival is clear-cut. Simple. In the real world, it’s anything but.

I love survival books and plane crash books (wow… does that sound insensitive!? Haha!). I love the excitement and survival instincts they bring out in our characters. Girl Underwater had been on my radar for quite some time, so I jumped on it as soon as I could. While it was not what I expected, I ended up really enjoying it anyway! As always, my main points are bolded. :)

1. I know this has nothing to do with the story or the author, but Tracey Garvis-Graves, my favorite author ever, blurbed this book. She wrote the ultimate survival love story of our time (On the Island), so if she thinks that Girl Underwater is, “a powerful love story embedded in an action-packed tale of survival” then I’m going to be all over it. Her endorsement is a huge selling point for me.

2. I felt a little disconnected from the story. The plane crash and the beginning really hooked me, and then the story alternates back and forth between the snowy dangers of the Rocky Mountains and the realities that occurred after Avery’s rescue. I was disappointed in the fact that we knew right from chapter two that Avery makes it home. It kind of took away feelings of suspense or discomfort, and I was not on the edge of my seat as often as I could have been. I also hated being ripped out of the mountains to read about her life after her rescue. I wanted most of the book to take place on that mountain, with maybe some of the aftermath in the ending chapters or an epilogue. That’s what I mean when I say the book was not expecting. But once I got passed the fact that my expectations were inaccurate, I was able to enjoy the book for what it was.

3. I was expecting a survival story, but what I ended up getting was what happens in the aftermath of surviving. It’s a story about surviving life after you survive a disaster. We read a lot about Avery’s attempts to deal with her PTSD and her efforts to pick up where she left off the moment her plane went down. It was a very powerful, yet sometimes depressing, portrayal of someone who has gone through the unthinkable. You do not get this in books (or news stories) often, so I did appreciate the added details that are usually left behind the scenes.

4. I really loved the characters. Avery is strong in the mountains, and she is strong after she returns home. She was strong in two different ways, though. On the mountain she was strong for Colin and the three little boys she was stranded with. She did everything in her power for them, even if it meant risking her life. When she was back at home, she finally had to focus on herself. She had to be strong for herself, and that is oftentimes the hardest thing to do. I loved Colin so much. He’s the typical gentleman, who was concerned. He was also so swoony to me the way he treated those little boys. And the boys were very sweet and lovable.

5. There were so many feelings and emotions. It was quite a roller coaster, but I ended up really loving and appreciating that about the book. Girl Underwater acted as more than entertainment. I learned a lot about what goes through the mind of a PTSD victim, and I got to see what I think was a very accurate portrayal of what it’s like to be recognized in public for something you’d like to forget ever happened to you. I really felt for Avery. Moving on is hard when the media and your friends keep pulling you back to such a painful event.

6. I loved watching Avery learn to cope. And I loved watching her come to terms with her life and embrace the good parts of it, even if they make her remember the bad times. She never gave up on herself.

7. The romance was not the focus of the book by any means, but it was an underlying factor. I couldn’t help but hope for the best, and I was very happy with how things turned out for everyone involved. It was real, not ideal. And it was beautiful.

Overall, this book reminded me of how much I love reviewing books. I went into this wanting one thing, and the author gave me something I needed instead. I really loved reading about Avery’s and Colin’s stories, and I loved watching their lives change shapes as a result of what happened to them. I think this book would appeal to anyone. It definitely has young adult/new adult/adult crossover appeal, and it has a little but of everything for everyone. Highly recommended.

What if the life you wanted, and the woman you fell in love with, belonged to someone else?

Chris and Claire Canton’s marriage is on life support. Downsized during the recession and out of work for a year, Chris copes by retreating to a dark place where no one can reach him, not even Claire. When he’s offered a position that will keep him away from home four nights a week, he dismisses Claire’s concern that time apart could be the one thing their fragile union can’t weather. Their suburban life may look idyllic on the outside, but Claire has never felt so disconnected from Chris, or so lonely.

Local police officer Daniel Rush used to have it all, but now he goes home to an empty house every night. He pulls Claire over during a routine traffic stop, and they run into each other again at the 4th of July parade. When Claire is hired to do some graphic design work for the police department, her friendship with Daniel grows, and soon they’re spending hours together.

Claire loves the way Daniel makes her feel, and the way his face lights up when she walks into the room. Daniel knows that Claire’s marital status means their relationship will never be anything other than platonic. But it doesn’t take long before Claire and Daniel are in way over their heads, and skating close to the line that Claire has sworn she’ll never cross.

Everyone who knows me at all knows how much I adore On the Island, and Tracey. When I found out she was writing a new book, I knew I had to have it. It was on my to-read list before it had a title. I didn’t even know what it was about! I just knew if she wrote it, I needed it. When I found out what Covet is about, I was scared. I typically don’t read books like this one, but I trusted my love for Tracey’s storytelling, and went with it. And again, she hit it out of the park. Finally, a women’s fiction novel I’m on board with. I loved it! As always, my main points are bolded. :)

1. Tracey has this amazing knack for tackling controversial subject matter and making it seem less controversial. And I love that she’s not scared to do it. On the Island deals with a non-conventional relationship (a rather sizable age gap), and she wrote it perfectly. It didn’t seem weird anymore. The same goes for Covet. Again, Tracey tackled a non-conventional relationship: an emotional affair. I’m not usually ok with this, but I totally understood these characters and their situations. Maybe it’s because she writes her characters in such a way that you can’t help but be on their side, or maybe she’s just perfect at putting emotions on paper. I don’t know what it is, but it’s a rare talent.

2. I was so invested in everything that was going on, and especially in the outcome. This book hurts! I felt such pain for Claire as I watched her husband neglect her day in and day out. I felt horrible for her husband, Chris, but at the same time I was SO mad at him for not pulling himself out of his funk long enough to realize what he was doing. Daniel made me swoon so much that I wanted to keep him for myself. And I felt so bad for him because he knew going in that Claire was married, but cared enough to just be her friend. Can you help who you fall in love with? These three just ripped me apart. I could not foresee an out come I would be ok with, but Tracey did it. I came out ok, and you will too!

3. The book goes back and forth between Claire, Chris, and Daniel. They each get to tell their story and share their feelings with the reader. I loved this, and I think it really contributed to my feelings of compassion and hope for all of them.

4. The friendship between Daniel and Claire is the kind that comes along once, but sometimes never, in a person’s lifetime. I really can’t even describe how I felt as I read their exchanges and their dialogue. They were there to fill the emotional voids in each other’s lives, and such an intense bond formed that I understood even though I felt like I shouldn’t.

5. Claire and Chris are also wonderful together. I loved reading about their first date and their courtship. And looking in on Chris in his office late at night, and jumping into his mind made me really pull for him. Basically, Claire is a lucky girl to have two great guys going after her!

6. Tracey’s writing is superb! I just love her style.

Overall, Covet is an amazing look into an issue that’s probably a lot more common than we think. I loved and felt for all the characters, and really enjoyed reading it! I’m still a fan of Tracey’s!