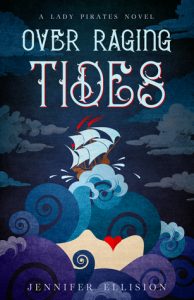 The pirate crew of the Lady Luck lives by many rules, but chief among them is this: they do not allow men on board.

That’s a rule that quartermaster Grace Porter is willing to break when a shipwrecked young nobleman offers her information of an omniscient map, stolen from his warship by an enemy vessel. Until now, the map was only the stuff of legend… but with its help, Grace may finally be able to hunt down the Mordgris, the sea monsters who stole her mother away from her.

Unfortunately, some members of her crew have other plans...

To find the map and face the Mordgris, Grace will have to confront her past, put the Luck between warring nations, and uncover treachery aboard the ship. And ultimately, her revenge and the destruction of the Mordgris will come at a hefty price: the betrayal of her crew.

Grace promised them they wouldn’t regret this.

She just isn’t sure that she won’t.

I love stories set on the high seas, particularly when pirates are involved, but I usually gravitate towards romantic stories with male pirates because I have a major crush on bad-boy pirate types, apparently. lol. I’ve never read a book with female pirates before, but I really enjoyed this one!

First off, the narration was amazing. Victoria Boulton’s performance really drew me in and had me hooked from early on. She did not read too quickly or too slowly, and her British accent brought each character to life.

I loved the setting of the Lady Luck, and reading about all the ins and outs of life aboard the ship. The crew is made up entirely of women, who live by a very strict code of honor. No men are allowed on board, no children can be kidnapped and forced into service, no crew member is allowed to steal from the rest of the crew, etc. And unlike Captain Barbosa, these rules are not merely guidelines. They take these rules very seriously, and I quite liked reading about a bunch of pirates who at least have some morals.

The story itself was not particularly unique, but I still enjoyed this adventure on the high seas. The crew is on the hunt for the holy grail of all treasure: a map that will lead them to any treasure they wish. There are obstacles along the way, and two of those obstacles come in the form of two brothers who Grace saves from the Mordgris–the sea monsters who took her mother from her. Grace breaks a cardinal rule and brings them aboard the ship. As it turns out, the older brother, Leo, can help them find his map. The little brother, John, endears himself to the crew, so they decide both boys can stay. For now. I liked Grace, John, and Leo, but didn’t feel much for the rest of the characters. They all felt like typical pirates to me, with no real unique traits that made them stand out to me.

This was my first book by Jennifer Ellision, and I really enjoy her writing style and creativity. While the story kind of follows the normal pirate adventure formula, she’s added some elements that set it apart. I’m super intrigued by the Mordgris. I want to know more about them and their origins and purpose. What are they really about? Who are they? They play a big part in Grace’s life quest and are the real reason she wants this magical map. She hopes, against all odds, to find her mother. I loved reading about her determination, and the fact that she believes that family is more important than all the riches in the world. I’m really eager to see how things work out for her and to learn more about this world and the map. There’s so much to look forward to with the next book! And beware, this book ends on a major cliffhanger and you’re going to want more story ASAP!