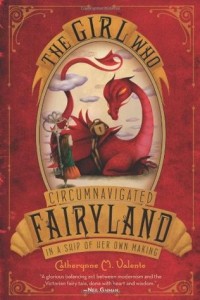 The Girl Who Circumnavigated Fairyland in a Ship of Her Own Making Published by Feiwel and Friends on May 10, 2011
Genres: Fantasy
Pages: 247
Format: eBook
Source: Purchased
Add to Goodreads
Buy on Amazon

Twelve-year-old September lives in Omaha, and used to have an ordinary life, until her father went to war and her mother went to work. One day, September is met at her kitchen window by a Green Wind (taking the form of a gentleman in a green jacket), who invites her on an adventure, implying that her help is needed in Fairyland. The new Marquess is unpredictable and fickle, and also not much older than September. Only September can retrieve a talisman the Marquess wants from the enchanted woods, and if she doesn’t . . . then the Marquess will make life impossible for the inhabitants of Fairyland. September is already making new friends, including a book-loving Wyvern and a mysterious boy named Saturday.

With exquisite illustrations by acclaimed artist Ana Juan, Fairyland lives up to the sensation it created when the author first posted it online. For readers of all ages who love the charm of Alice in Wonderland and the soul of The Golden Compass, here is a reading experience unto itself: unforgettable, and so very beautiful.

This is one strange little book, with language I’m not sure I would have understood at age 11 or 12, which is the age I would recommend this book to. I think it’s too young for teenagers, but I don’t think I would have liked is as a tween, but I was not a fan of fairy tales at that age. I’m sure I would have liked the wyvern’s (dragon) humor and the cute illustrations at the beginning of each chapter, though. As an adult, I found myself being bogged down by purple prose (and too much of it!) and so many details that I was unable to actually keep track of what was going on.

The writing style is very pretty and ornate, but too much so and the language is too advanced for the age group the book is marketed to. September’s voice is very strong and dynamic, but she does not act her age (12) because of the way she talks and the way she acts (she uses an advanced vocabulary, but at the same time is naïve enough to run away with the Green Wind). There were too many details and it was so overly stylized that I found myself spacing out and losing focus. It made me tired. I also felt that referring to September as being “Ravished” was a bit odd and sexual. Overall, I just wasn’t a fan and am not sure who I would even recommend it to because it does not fit into one specific age group. 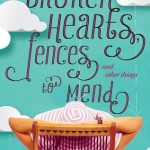 Broken Hearts, Fences, and Other Things

4 responses to “The Girl Who Circumnavigated Fairyland in a Ship of Her Own Making by Catherynne M. Valente | Mini Book Review”